The history of perfume is fascinating and is shrouded in mystery, seduction and sacred practice.

Its story brings us all the way back to as early as 7000BC, when found objects that hold perfume and cosmetics are thought to date back to. At that stage perfumes were mainly resins and even 2000 BC Egyptians captured fragrances in cold or heated fat and they used scented incense as offers at the burial of mummies where it was believed to be the ‘sweat of the gods’.

It is hard to pinpoint the exact origins of perfume, some say it originates in Mesapotamia while others take it that it comes from what is still called ‘Land of Perfumes’ -Arabia. There is no doubt that perfume plays strong roles in most cultures where it often has connections to the spirituality, god and all things sacred and divine.

Much of what we now know about early Arab perfume comes from an Arab perfume recipes volume called ‘The Book of Perfu’ by Yakub al-Kindi which dates to 803-870 AD. Islamic cultures not only invented steam distillation but also contributed to Western development of perfumery by introducing new raw materials.

Perfume manufacture by cultivating flowers for their essence in France began in the 14th century and the country quickly grew into the European centre of perfume and cosmetics.  Even today the perfume Industry in France is a thriving machine that uses ancient alchemy to produce the most luxurious scents.

Scents distilled from flowers have a long history and most quality perfumes we know today contain oils derived from flowers. One of my favourite scents is the unmistakeable scent of Rose which features in so many perfumes and gives many perfumes the raspberry, lemon zesty fresh scent that is so recognizable. The name rose actually comes from the French and can be traced back through Latin to ancient Greek and ultimately to the old Persian Wurdi.

The making of the Rose essence starts with the Rose flower which is also known as the ‘Queen of Flowers’. Most essences are made either from the Rosa damascena, which is mostly found in Arab countries or the Rosa x centifolia which grows mostly in the South of France. 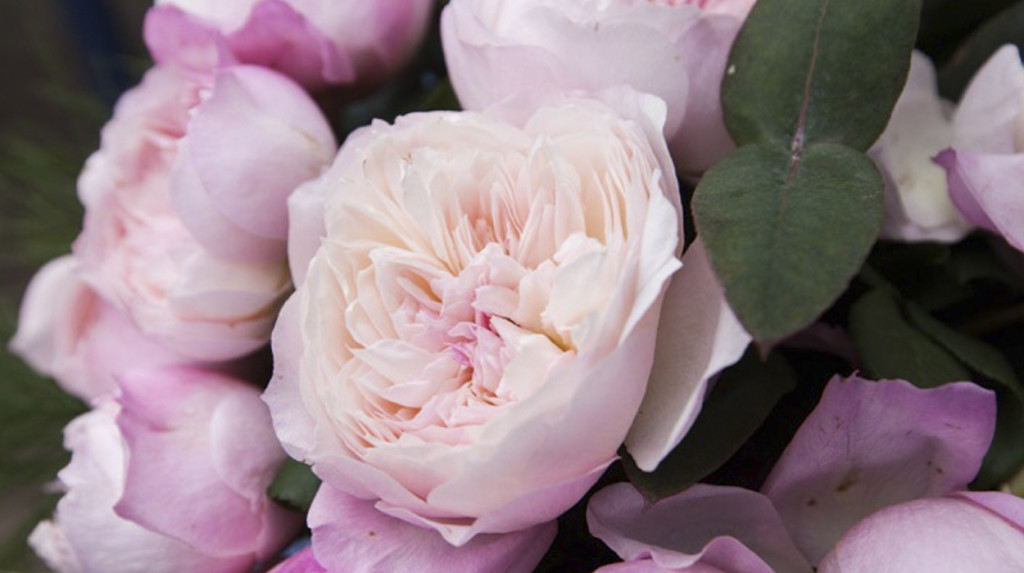 Creating Rose absolute, the most coveted essence, is a painstaking process which begins with the picking of the petals. This is not a quick process as it takes about 60,000 roses to make on ounce of Rose absolute! These roses then need to be dried and bathed in an organic solvent and after the solvent is removed you are left with a syrup called concrète. This concrète  is then processed with alcohol to separate the plant waxes from the liquids and when it cools the solid parts are removed. Then is is distilled again to separate the essence from the alcohol and you are left with one of the most coveted and expensive materials for perfumes worldwide.

Growing this Rose, which is also known as The Cabbage Rose or the Provence Rose, in your own garden is not so hard if you can get your hands on one. The shrub shaped rose grows to about 1.5 metres and flowers from May to July- hence it’s French name ‘Rose de Mai’. The flowers on these plants are hermaphrodite, meaning they are self-fertile. They prefer a well drained soil and can even grow in semi-shade though the scent of these beauties is most striking in sunshine. 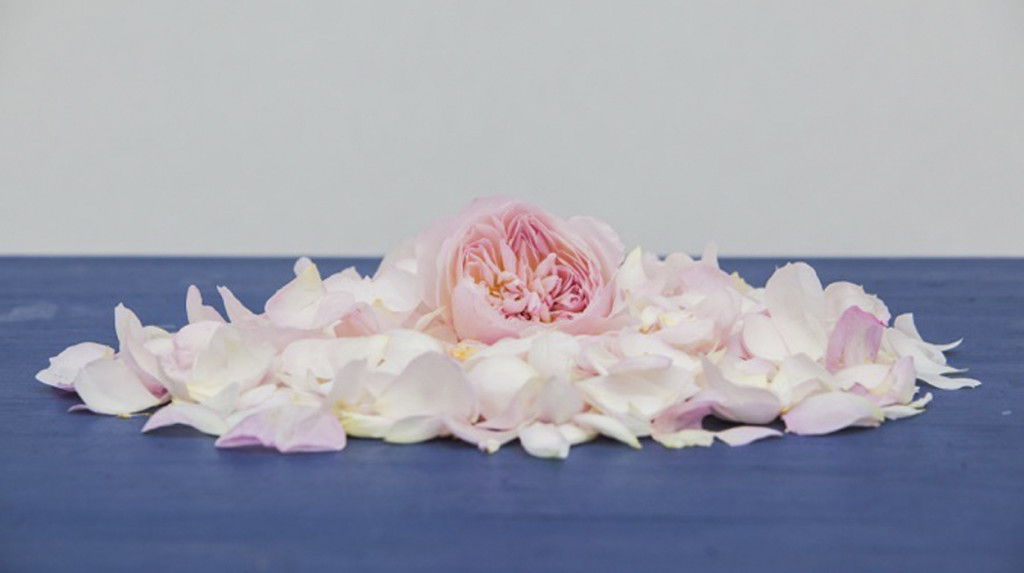 There are many flowers  and ingredients that give our beloved perfumes their unique scent. Since ancient times people have used everything from Patchouli, which is the strongest aroma in the plant kingdom to resins such as tree resins and the earthy Oakmoss of lichens as well as Frankinsence, the church incense. Woods such as Sandalwood and Cedarwood have also long been used in ancient religious rites in the far east but it is the floral scents that often steal the show in modern times. Here are three more flowers which are staples of the perfumers magic box. 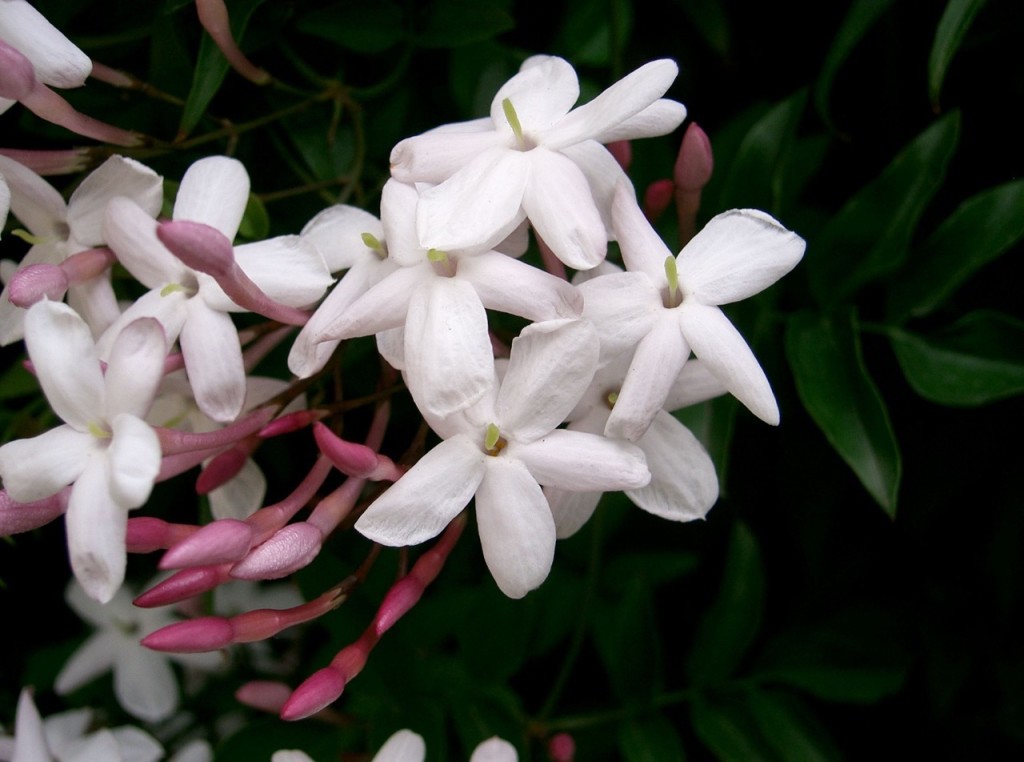 Where the Rose is considered the Queen of flowers, Jasmine absolute is known as the ‘King of oils’. Jasmine can be found in so many perfumes and is one of the most popular scents. In its native India, where many Jasmine flowers for perfumes originate, the flower is thought to be the flower of the Gods and if you close your eyes and breathe in the scent, it is not hard to understand why. The scent is complex even it itself, with hints of green banana with the strength of leather and a fruity sweet summery note.  Processing this flower is tricky and as it releases its scent at in the late evening, hence the name ‘Queen of the night’ and the picked flowers must be immediately processed before they start to wilt. Added to this the flowers must be carefully picked in special baskets so the delicate petals don’t bruise and so change the bouquet of the flower. It is one of the most pricey oils to buy, and no wonder, it takes about 8000 flowers to make one gram of the oil! 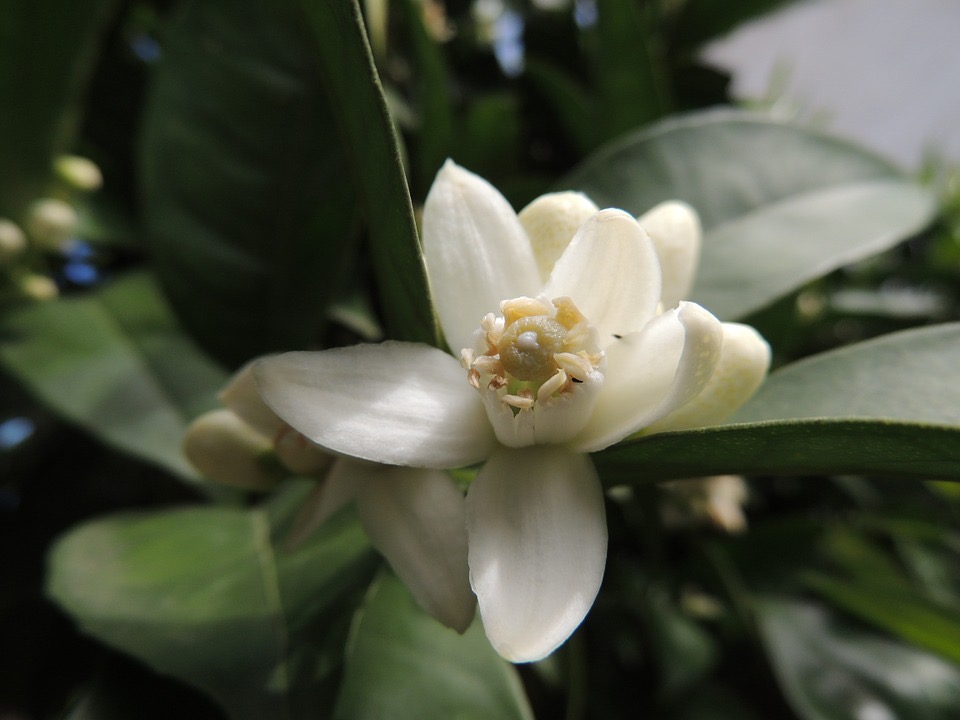 The bitter orange tree is a resilient evergreen tree, Citrus aurantium who’s beautiful almost orchid like flowers have a stunningly strong scent. Anyone that’s ever smelled one knows the scent is almost intoxicating and so quintessentially Mediterranean. Interestingly, the blossoms of this tree create both the Orange blossom absolute as well as Neroli oil and the two differ in aroma and texture due to the processes they go through in extraction. Orange blossom absolute is used in many perfumes as a fixative as it blends so well with most other scents-complementing everything from florals to woody tones and even spices. Neroli, which was named after the Italian Princess of Neroli, tends to be lighter in colour and aroma and is in many citrus colognes and perfumes. 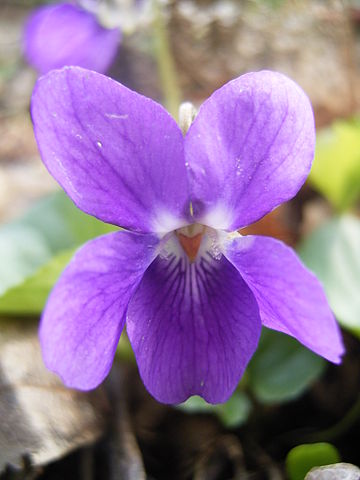 Both the leaves and the flowers of the Viola odorata are used in perfume making and yet the scent between the two differs greatly. Where the flowers have a powdery sweet woody smell due to the ionones in the flower, the leaves smell like freshly cut grass, intensely green with a hint of cucumber. Two type os Violet are grown in the South of France for the perfume industry-the Victoria and the Parma.

Interestingly the Ancient Greeks made the Violet the official symbol of Athens and Napoleon chose the Violet as his signature flower.  This plant is very common in the shadier borders of Ireland and if you walk near a woodland at this time of the year you’re sure to spot some of these delicate beauties. 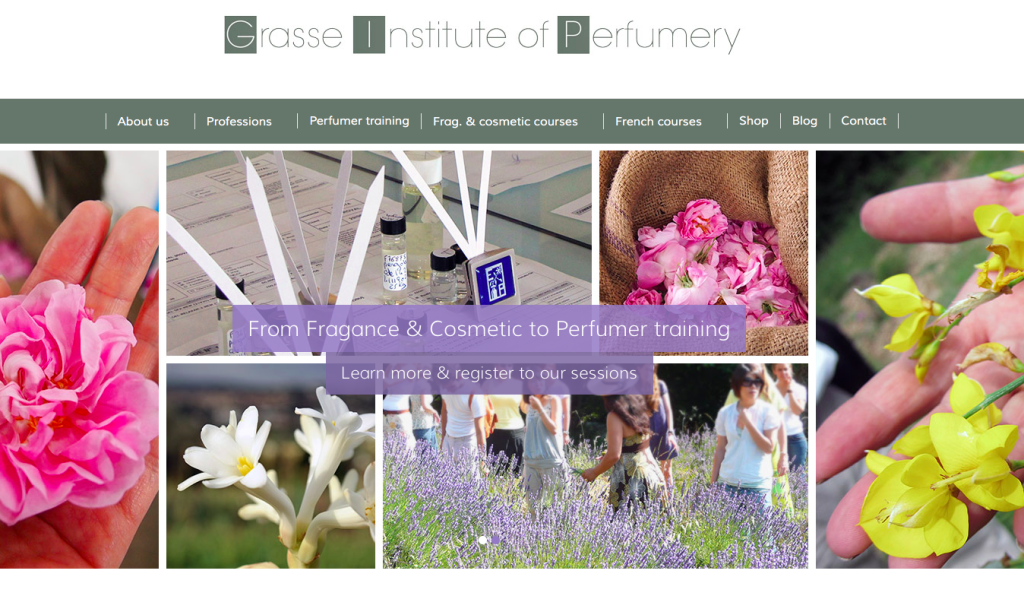 If exploring the world of scents is something that interests you then what better place to start this journey than the perfume capital of the world-Grasse? The Grasse Institute of Perfumery runs a course in a 13th Century Convent in the heart of the provence. The Institute, created in 2002 by Prodarom, the French Association of Fragrance Manufacturers  the aim of our perfumery school is to train student perfumers and the Institute also offers seminars, workshops and summer internships to explore the world of fragrance for lovers of the enchanting world of fragrances. The course ‘Scents of Provence’,  which costs €1,500.00,  runs  from Monday the 4th to Friday the 8th of July from 9 am to 5 pm and lunch is included. For more go to www.grasse-perfumery.com 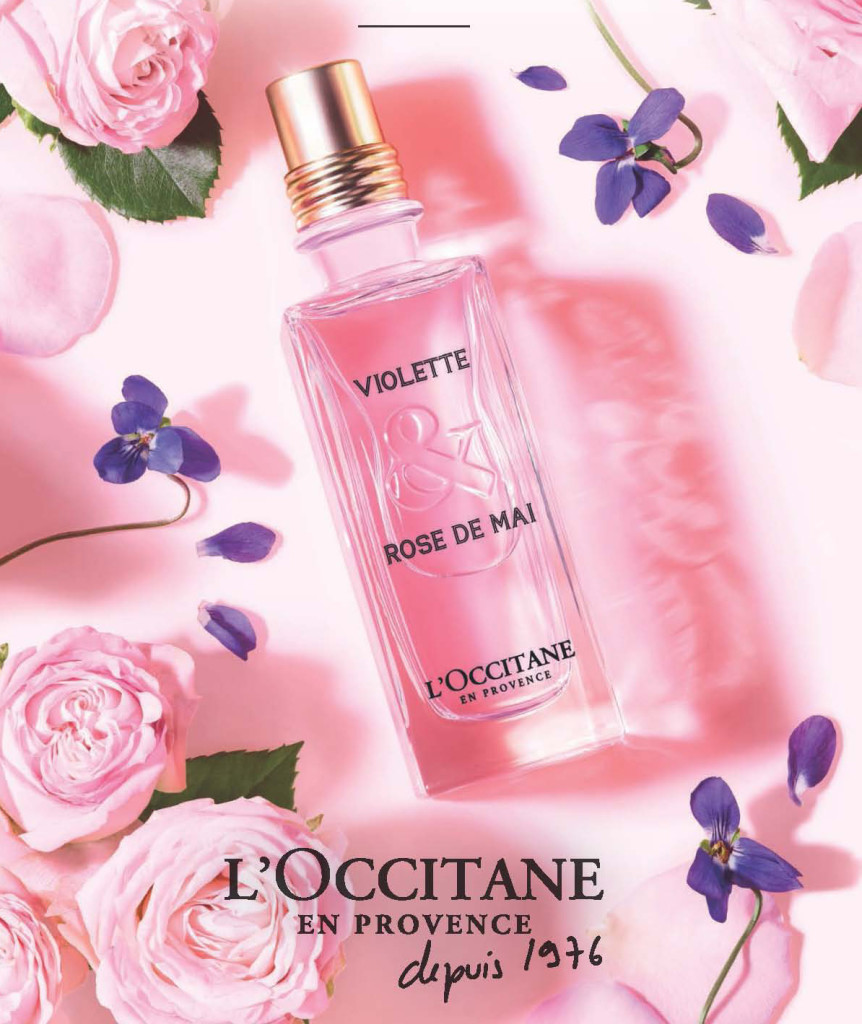 For me perfumes often send me back to particular times in my life. They are  intensely personal and I am often surprised how they draw a strong emotional reaction. The fresh Rose scent of Eau de Cartier Goutte de Rose for example  is one that makes me think of summer holidays as a teenager while Bois de Violette by Serge Lutens makes me think of nuzzling up to my grandmother’s soft, sweet, talcy-violet fragranced neck as a child.

One scent that takes the powdery sweetness of the Violet and combines it with the romance of the Grasse Rose is the new fragrance by L’Occitane which is launched in time for the company’s 40 year anniversary this year. It’s a surprising scent which plays with tarty top notes of Rhubarb and Blackcurrant and blends it with base notes of Sandalwood and Musk while never losing the heart of the fragrance-the Queen of the flower-the Rose. For more go to www.loccitane.com

Cerulean blue Woodlands in May