Some gardens take your breath away. Whether through sophisticated planting design, clever colour or material use, fascinating historical contexts or spectacular visual settings; some gardens just shine brighter than others. Anyone that has ever visited the Lissadell house gardens will know what I mean. Set smack bang on the edge of the wild Atlantic coast, the house, which sits surrounded by sloping pastures and lush woodland leads the eye over undulating limestone walls, across mounded floriferous gardens to Drumcliffe Bay and all the way beyond- to the magnificent rise of Benbulben mountain. 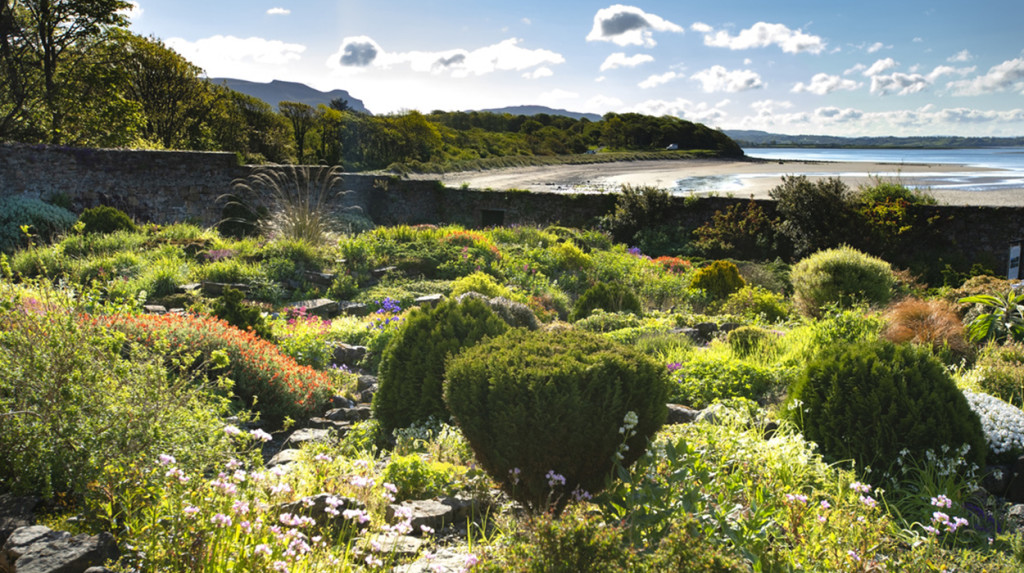 The house, grey and austere in its neo-classical Greek revivalist style, was the childhood home of Irish revolutionary and the first female cabinet minister in Europe Constance Gore-Booth, her sister the poet and suffragist, Eva Gore-Booth, and their siblings. It is of course also known to have been a favourite stay of the world-renowned poet, William B. Yeats who spent childhood holidays at the house with his brother Jack B Yeats and became friends with the Gore-Booth sisters Constance and Eva. Today the house is home to Edward Walsh, his wife Constance Cassidy and their seven children who bought Lissadell in December 2003. Resolved to bring the estate back to its original glory the family knows first-hand the magic which Lissadell holds. A location steeped in history and with the most stunning setting, the family have spent many years slowly and lovingly restoring, redesigning, and replanting at and in the house and gardens. For me, one of the most fascinating things about places with so much history from a garden perspective is how the layers of design and planting touches which the owners and every gardener, designer and horticulturist who worked here over the many years are apparent in the gardens.

I marvel at the gardens and think that, like an ever evolving palimpsest, the small touches of each individual’s personality have been left in this beautiful location here on the edge of Europe.

One garden section where these layers of ideas, passion and talent are  particularly apparent are the famous Alpine gardens. This garden was originally created in the 1740’s as a walled kitchen garden for Steward’s House -the eighteenth century residence of the Gore Booth family at Lissadell- which was located adjacent to the southeast wall of the garden but has since been knocked and rebuilt. 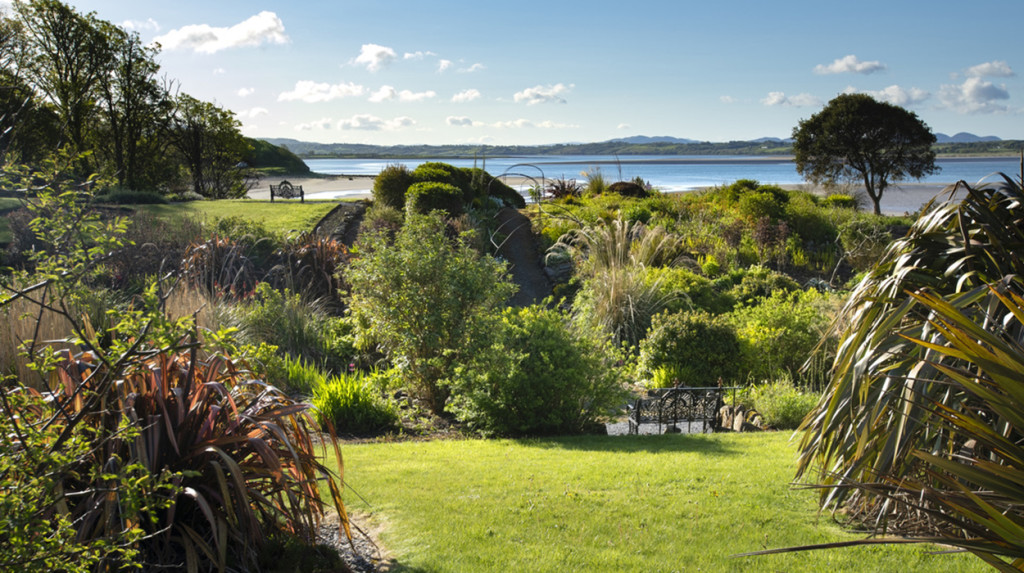 By the 1920’s the garden had evolved from a kitchen garden into a unique  established Alpine garden with unusual, undulating sloped terrain and terraced water features with stunning views to the sea beyond. The garden became the exhibition garden for alpine and herbaceous plants which the owner Sir Josslyn Gore-Booth,  a noted horticulturalist collected and bred in the garden. Head gardener at the time was Joseph Sangster, who’s brief was to develop the gardens to make them profitable. Joseph worked closely with Josslyn in making the gardens commercially viable by selling produce locally and abroad by mail order. By the time he left Joseph had 70 men running both the gardens and a thriving bulb business which grew mainly narcissi and anemones. In 1915 Lissadell had 258 varieties of daffodil for sale!

Unfortunately little of this former splendour and care was apparent when the current owners bought Lissadell house in 2003. The two-acre Alpine garden had sadly been neglected for over sixty years and had become an ‘impenetrable jungle’,  overgrown with shrubs and trees. At the time it was obvious that the help of knowledgeable horticulturalists and experts in the field would be needed to restore the gardens. One of the country’s most knowledgeable plantmen, Carl Dacus was asked to help plan the restoration of the Alpine gardens. Working with Rachael O’Sullivan, a former student of the Dublin School of Horticulture and Pat Curneen and in consultation with Brian Wood of Murphy and Wood Garden Centre, a new plan was made for the Alpine gardens which saw various ground covers being added and the revêtment beds at the top of the garden which had originally been planted with alpines, being re-planted with masses of shrub roses, inter-planted with Russian sage (Perovskia), catmint (Nepeta) and Lavender. The team alongside Dacus, a master plantsman and previous Royal Horticultural Society’s instructor, also mademany additions to the herbaceous borders in the gardens. 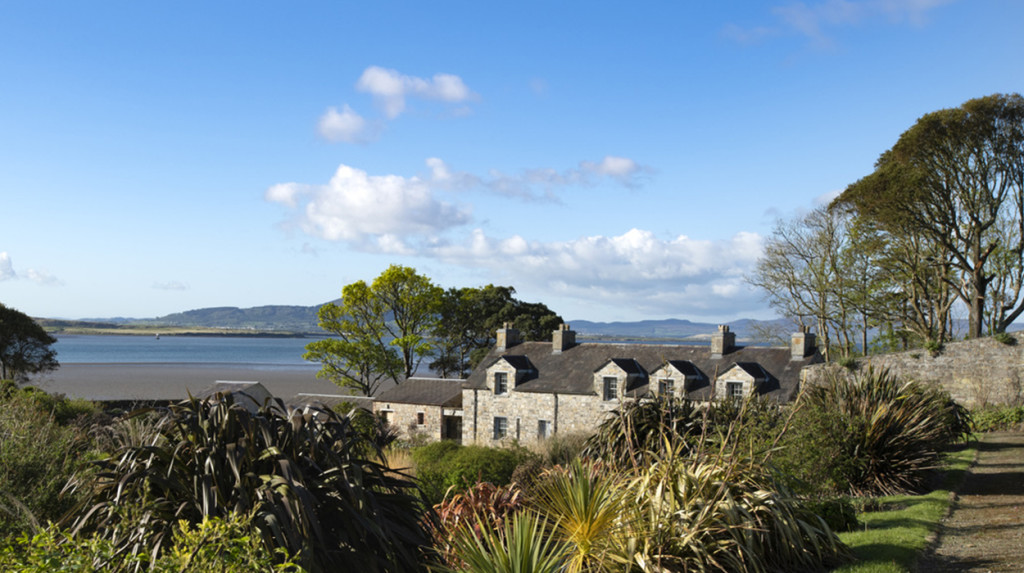 While this Alpine garden restoration work was ongoing, the Kitchen garden, which lies higher up towards the home and stables, was also being developed by a team of talented growers and plants people. In fact, this 2.2 acre kitchen garden was the first garden to be brought back into cultivation by Klaus Leitenberg, one of Ireland’s leading organic vegetable gardeners. Laid out in four equally sized plots Leitenberg took inspiration from the old plan and also divided each plot further for crop rotation. Growing hundreds of varieties of vegetables fruits and trees, almost exclusively Victorian heritage varieties, the garden became a colourful and thriving source of produce which supplied the Tea Rooms and the Heritage Shop at Lissadell. Also, over the years head gardener Dermot Carey left his mark on the kitchen gardens, adding his unique touches to the space.

Back in the Alpine gardens, another designer and master plants man who brought his undeniable flair was the noted Irish horticulturalist, teacher and plantsman Jimi Blake who is the designer behind the stunning Huntingbrook in County Wicklow.

Speaking of the time he spent designing at Lissadell Jimi remembers the garden as a ‘magical location’, a garden with the most unique characteristics. The location, on the coast with the salt-laden Atlantic sea air should, in theory at least, be inhospitable to tender plants but due to a unique micro climate, the alpine gardens are a place where plants, both hardy and tender thrive. The excitement of pushing the boundaries of what can be grow here -particularly tender plants- was one of the drawing points for his involvement at Lissadell. He tells me that the fact that the Alpine gardens which were totally overgrown for about 50 years have resulted in a wonderful rich soil, based on the leaf compost of the jungle like conditions. After clearing, the garden was left with this virgin soil- rich and compost like and ideal for many alpines and perennials. 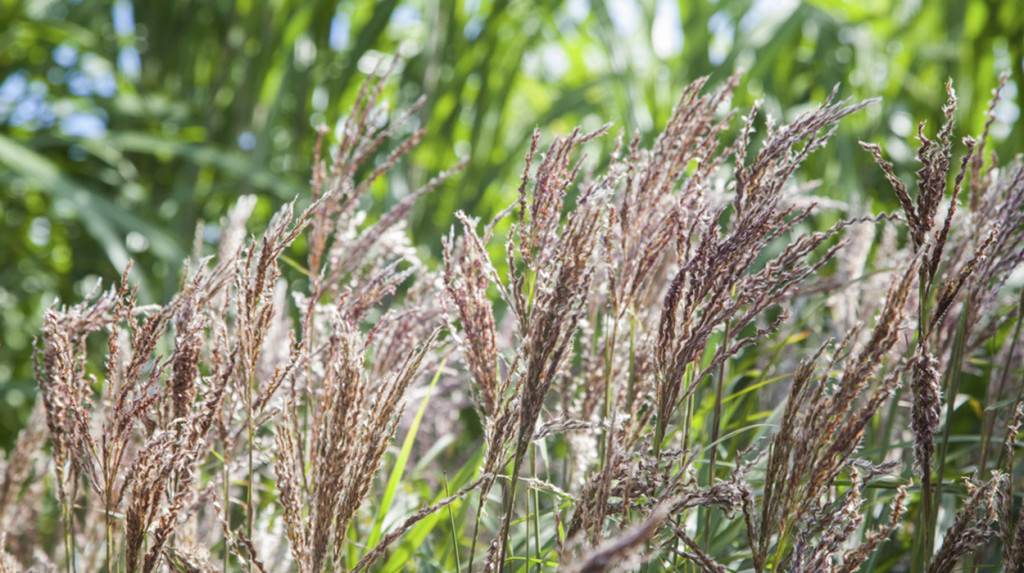 The location also plays a part in the once again thriving planting of the Alpine gardens. Equipped with the original Lissadell Alpine catalogues Jimi was able to see what was grown in the original Alpine gardens and add in original varieties as well as his signature touches of drama and excitement. Today, the Blake designed border which flanks the water terraced features still has many of the hot colours and frothy grasses which Jimi specified in his designs many years ago. A stunning mix of perennials and grasses such as miscanthus varieties brought a unique feel of contemporary planting into a historical setting. 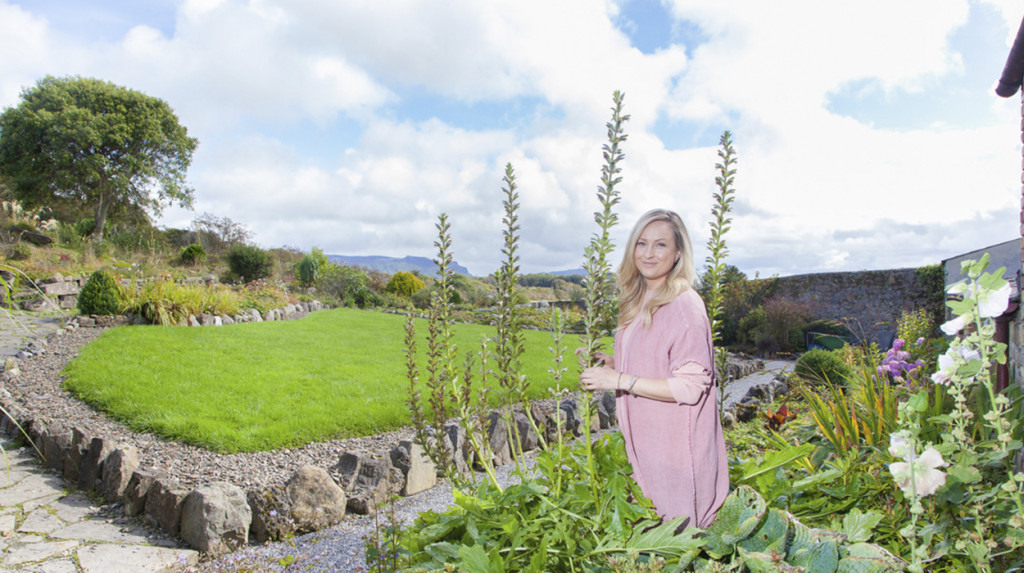 The Lissadell gardens truly have fascinating layers of the different gardeners planting styles which here somehow morph together to create something new and exciting. Old and new- perhaps it is the touch of all these designers, amalgamated into what the gardens are now that make the Lissadell garden planting so special?

Today, thanks to the owners and the help of many talented gardeners, horticulturalists and designers, and the loving care of today’s gardeners Frank Budzinak, Eddie Walsh and John Walsh,  the gardens are once again on the way to becoming one of the most spectacularly set and beautifully maintained gardens in Ireland.
www.lissadellhouse.com 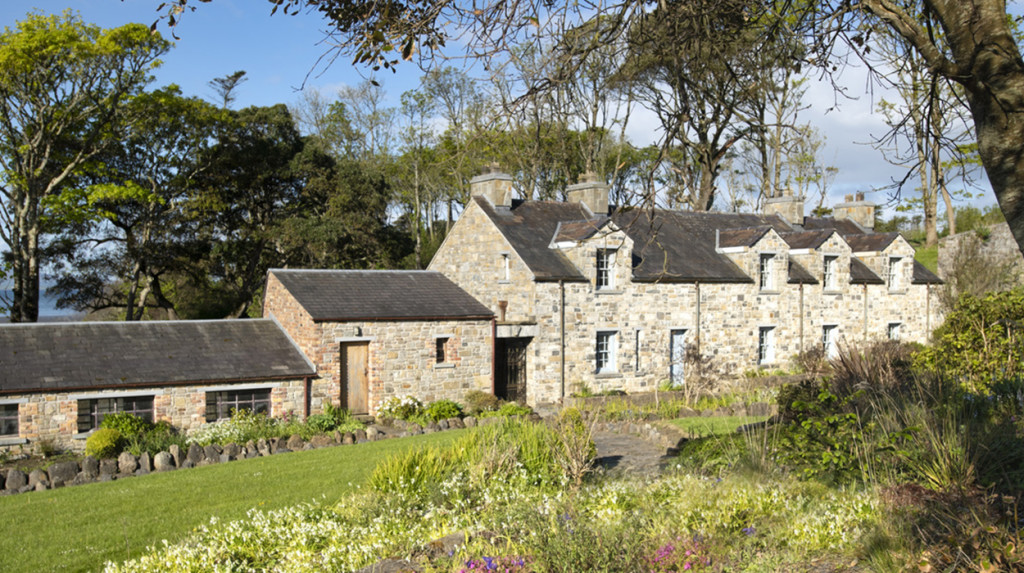 Lissadell on the Beach

If you fancy having the amazing alpine garden literally on your doorstep then you’ll love this: The beautifully restored Steward’s House by the Alpine Garden, fronting on the sea shore at Drumcliff Bay, Sligo, Ireland is now available to rent. Open the back door and sip your tea in the Alpine gardens or venture out to explore the beautiful Lissadell beach which is literally in front of the house. Magic. 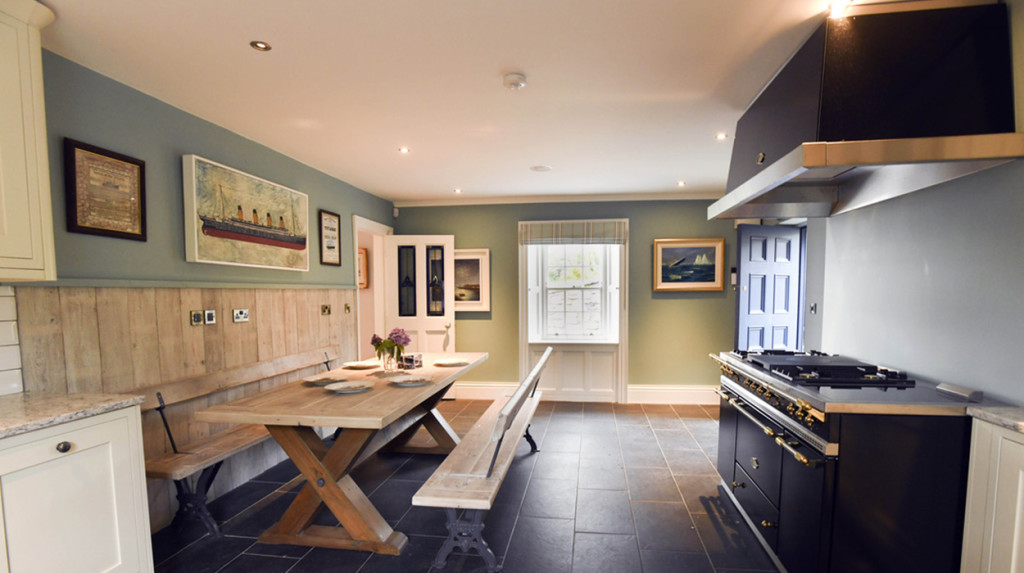 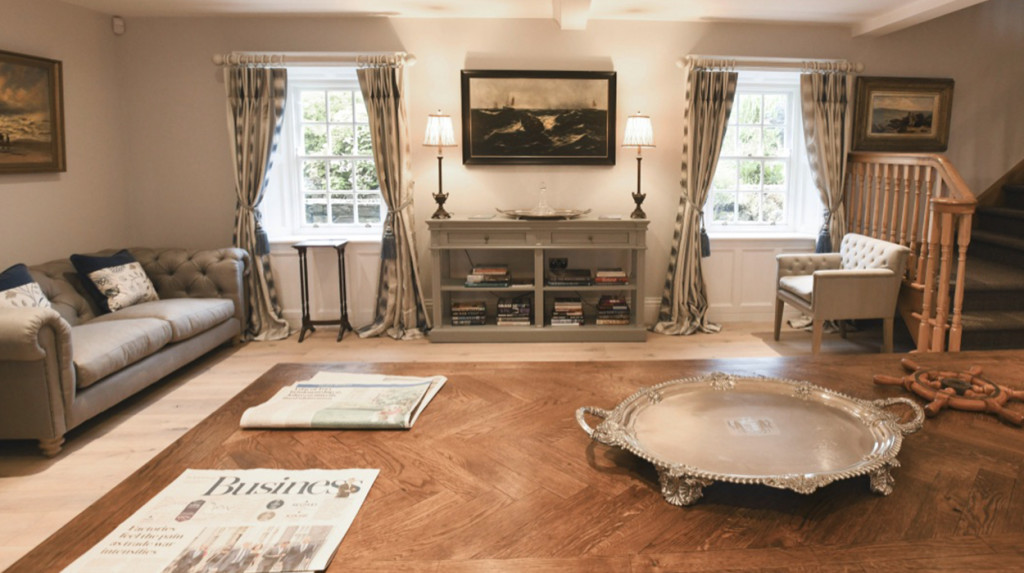 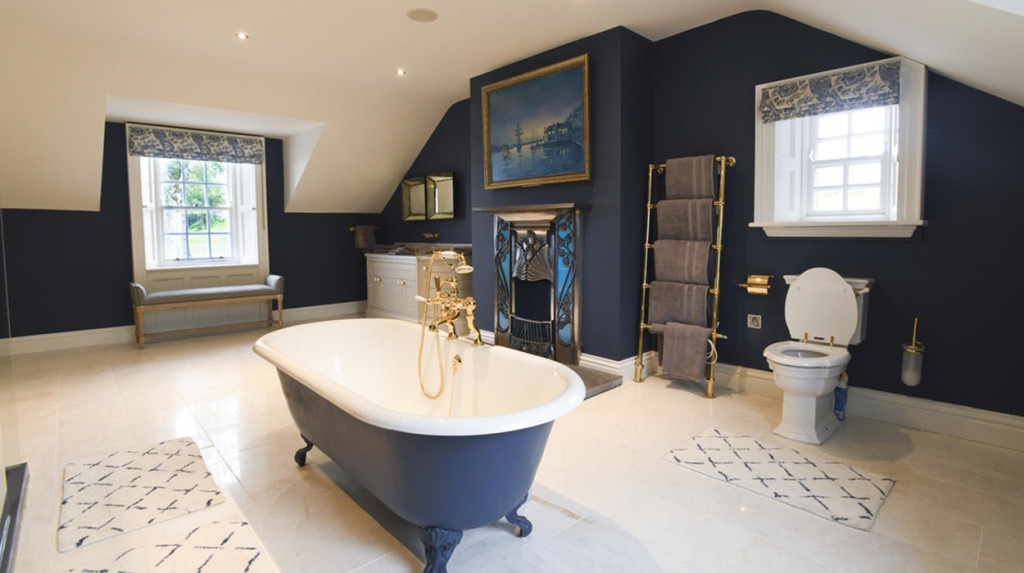 WB Yeats
“In Memory of Eva Gore-Booth and Con Markiewicz“
The light of evening, Lissadell,
Great windows open to the south,
Two girls in silk kimonos, both
Beautiful, one a gazelle.

How to grow your very own garden medicine cabinet