Most of us experience gardens in an intuitive way. We either feel good in a space or we feel uncomfortable. We tend to either like the garden or we don’t. Unbeknownst to many, there are often clever principles at work in the gardens that feel comfortable and good to us. Design principles such as harmony, balance, scale and proportion, symmetry, rhythm, mystery and many more are factors which make a garden feel special. This applies just as much to the planning of the space, the layout of the actual garden and the hard landscaping as it does to the planting of the garden. 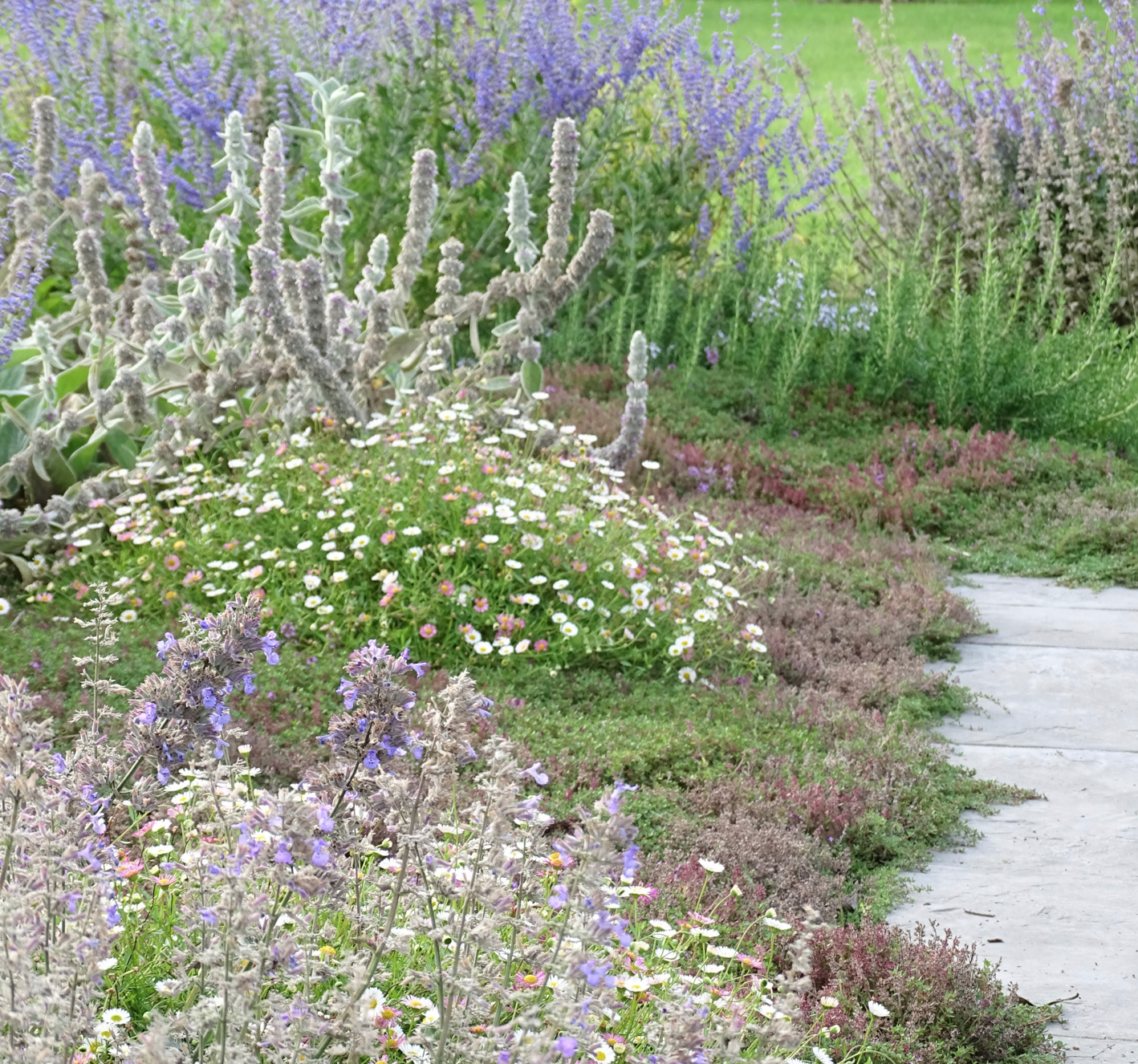 One very important thing to consider when designing a garden is shape and form of planting. This is definitely one of my favourite parts of a design job as strong planting really brings a designed scheme to life. As a designer I find that many planting projects have to consider a wider context such as the surrounding landscape. Here we must study how trees and plants chosen for the garden work within the context of the larger landscape. This is a particularly important aspect to study if there are views from the garden to areas of visual interest such as mountains, hills, coastal areas etc.  Taking note of the shapes in the distance can be a deciding factor in making your garden feel ‘right’  and have a harmonious relationship to its wider surroundings.

Considering this, the shape of the chosen plants or shrubs themselves is something that takes its cue from either the surrounding landscape. 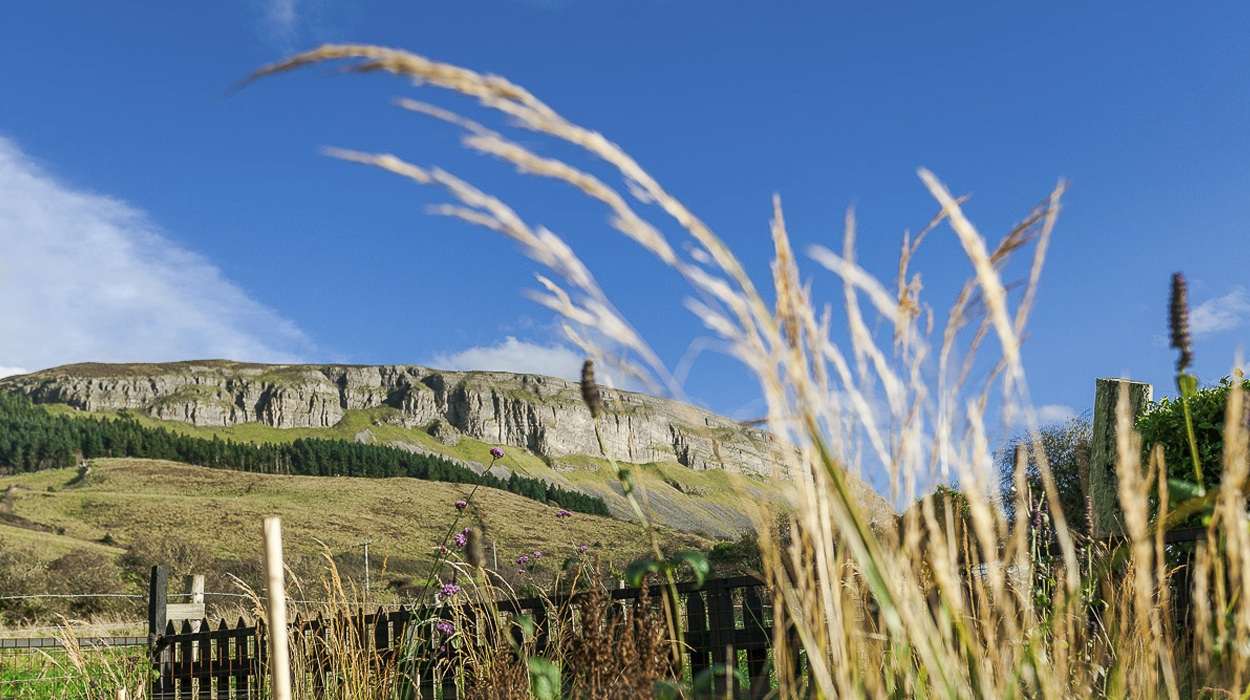 For example- garden that has views over large sweeping hills with spires of tall solitary pine trees in the distance may feature a scheme in the garden that picks up on this. The garden may have softly sloping lawns and feature taller solitary trees which echo the landscape and thus drawing the eye from the garden to the scheme beyond and back harmoniously. Large shrubbery on the hillside above may be replicated in smaller, neater shrubs which are shaped in a similar way to the wild version. Similarly colour may be picked up on and the yellow of, say distant Gorse bushes, can be considered in flowering shrubs in the garden itself. Another example is a garden that has views of a rocky coastal area with swaying grasses. Here we can use this as inspiration to create a scheme that echoes those views in the garden and pulls the views into the scheme to create a bigger picture. 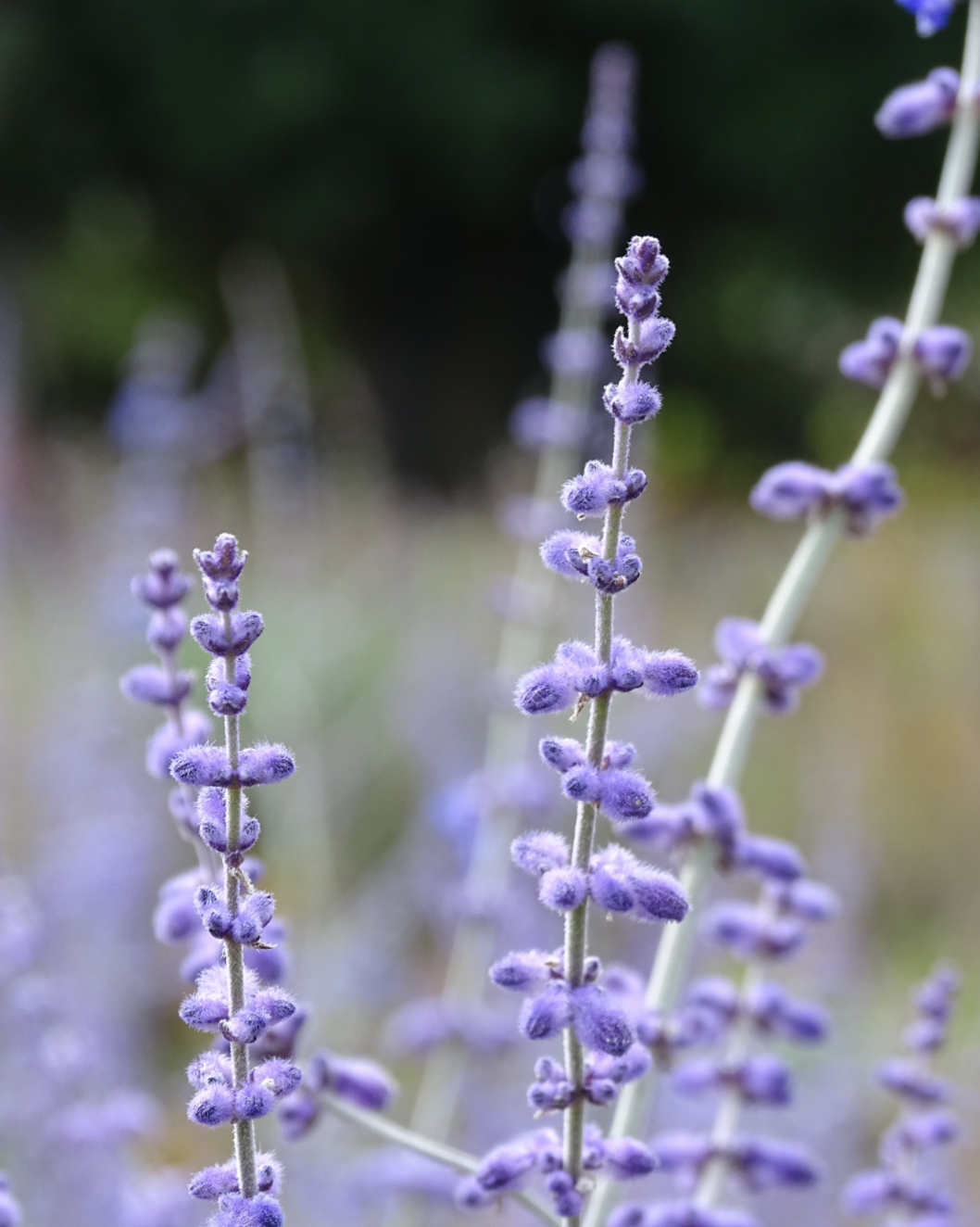 Interestingly this also brings us to plant ecology and what works well where. Take the coastal location with rocks and grasses. Using this as our planting cue is not only a good idea visually, it also makes sense from an ecological point of view. There is a reason this type of planting grows well in this location and picking up on this can make your own scheme work well in the climatic conditions that you have in your garden. 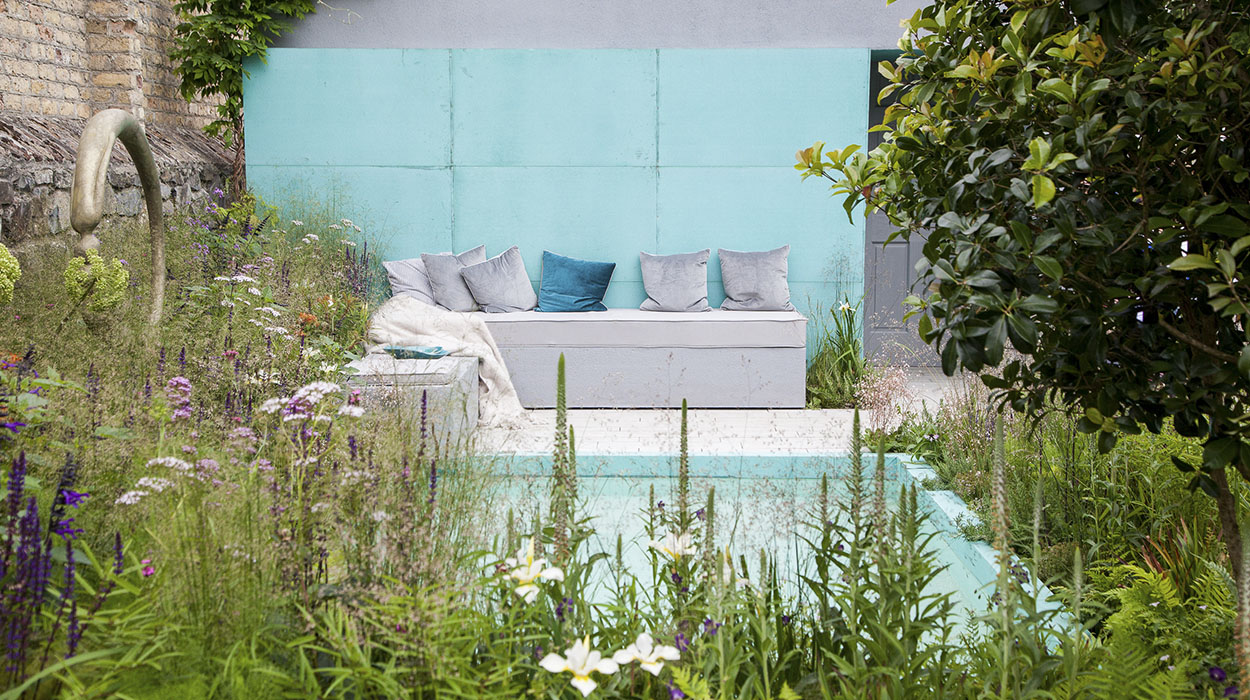 If the garden on the other hand is an internalised space-without any significant views-then you may have to draw inspiration from other areas of the project. Take for example an internalised garden such as a courtyard or a walled city garden- here you may have no views so your choices in shape and form can be chosen to create a scheme in itself. Here we can draw inspiration from the connections to the interior- for example if the interior has strong geometric furniture and clean lines then the shapes and forms in the courtyard space would look to work harmoniously with these and pick up on the feel of the interior. Alternatively if the house is a free flowing organic shapes then the garden may pick up on that in shape and form and bring the inside out and the outside in.

Once we have considered the overall shapes and forms of the planting scheme as a whole it is also important to consider the shape of the actual flowers and plants individually.

I am very much drawn to naturalistic styles that look to nature as inspiration. It  is fascinating to study natural compositions of plants and see how they grow without any human interference. This can be a great help when designing a scheme that looks natural and not too structured. One idea which you can take from nature is planning your planting in different layers. Consider a meadow where you have low hummocks on the lowest level with some taller flowers and then some elements which rise high above the whole scheme such as tall grass plumes or structural seed-heads. 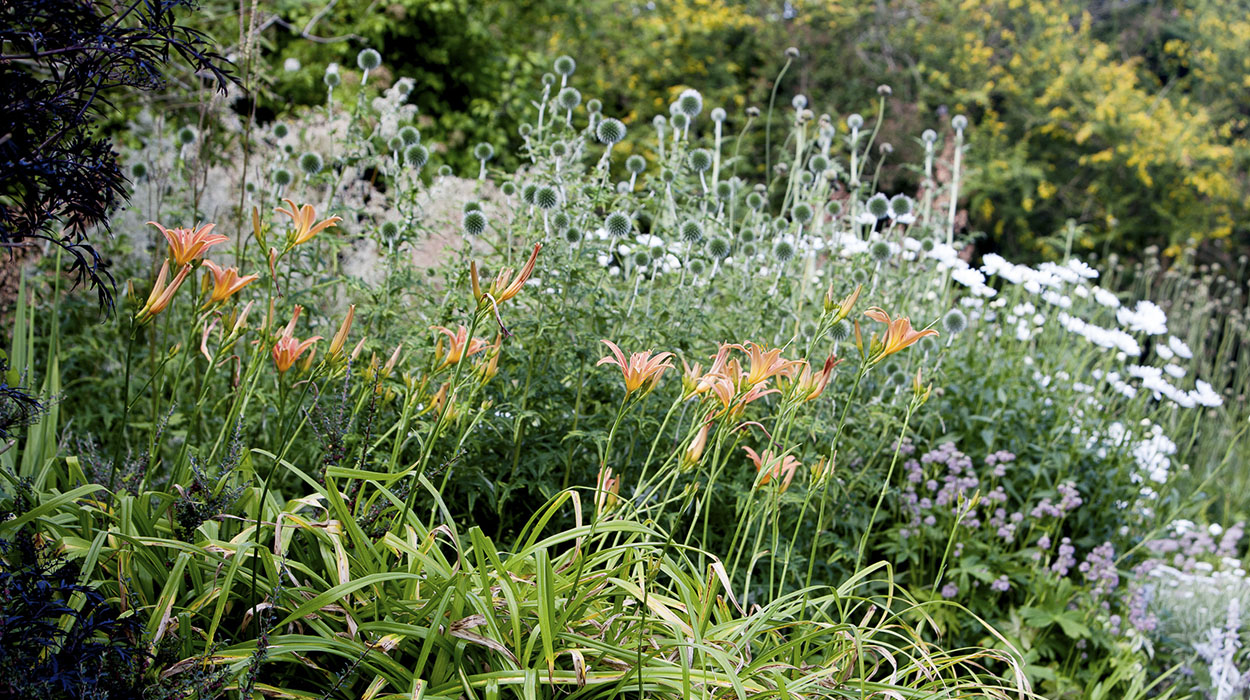 The lowest level plants are often low spreading grasses or small mounding plants that will do well at this level where there may be a little shade. In between this there is a middle layer which is a long lasting such as Salvias or Perovskias and then finally comes the tallest layer of plants which can be anything from tall grasses such as Stipa gigantea or even Verbena varieties. These will have striking architectural shapes and less foliage to allow light to filter down to the lower levels. Having different levels in a scheme makes for a very interesting composition and makes the scheme look very natural. 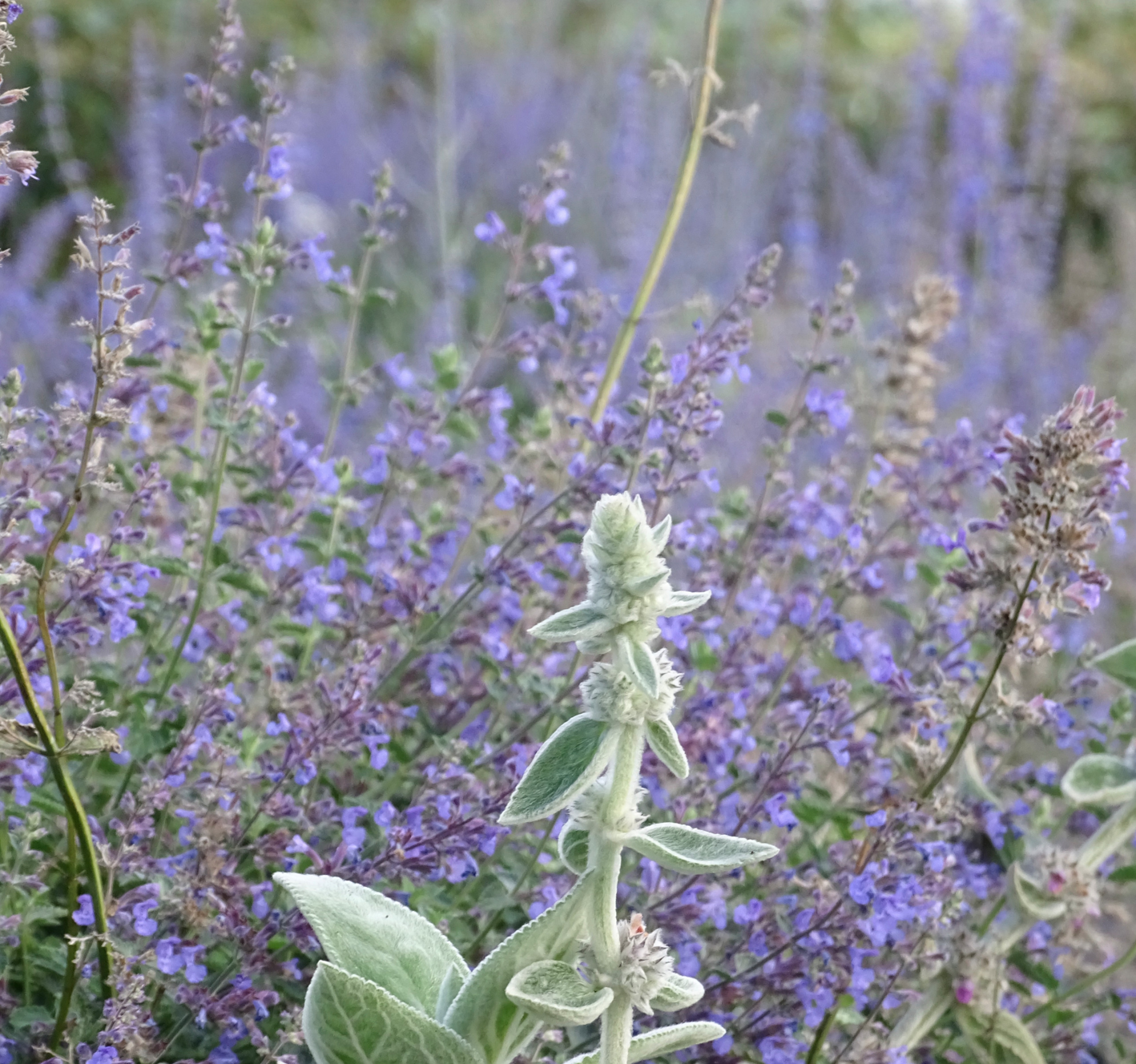