Cover Image Patthana Garden
Plants and flowers with some serious scare factor
What’s the first word that comes to mind when you think of the Halloween garden? I would hazard a guess that it is probably ‘pumpkin’?. It is no wonder, with the endless jack-o-lanterns glowing spookily on doorsteps and window sills everywhere at this time of the year. Every supermarket, local shop and garden centre has some available to buy and allowing Halloween to inspire you to carve gory faces out of the shell is one of the most fun things to do in October.
While pumpkins are certainly the most popular associated plant at this time of the year- there is a whole other world of scary plants from the wild which will send a shiver down your spine. From deadly poisons to the scent of corpses, witchcraft and warewolves: here’s my top 8 of the spookiest plants from the garden. Read on at…..your own peril……
Top 8 spookiest flowers from the garden
1. The colour Black
Let’s start with the colour of darkness. Historically Halloween is the time of the year when the veil between the world of the living and the dead are at its most thin. Halloween- or the Celtic ‘Samhain’ – where Halloween is said to stem from- is the festival which welcomes the darker hand of the year so it is no wonder that this time is associated with the colour black. In the garden there are numerous flowers which have beautiful black flowers or foliage. Some examples of black plants are the gorgeous  rich black grasslike plant Ophiopogon planiscapus ‘Nigrescens’ and the gorgeous Hollyhock-Alcea rosea ‘Nigra’ as well as the Helleborus × hybridus Harvington black with its divine black flower. Iris chrysographes ‘black-flowered’ is another gorgeous plant with pure almost black flowers.
The blackest all blacks comes from the stunning Heuchera ‘Black Pearl,’ which has almost no red tints and makes for a gorgeous striking addition to the Halloween garden. 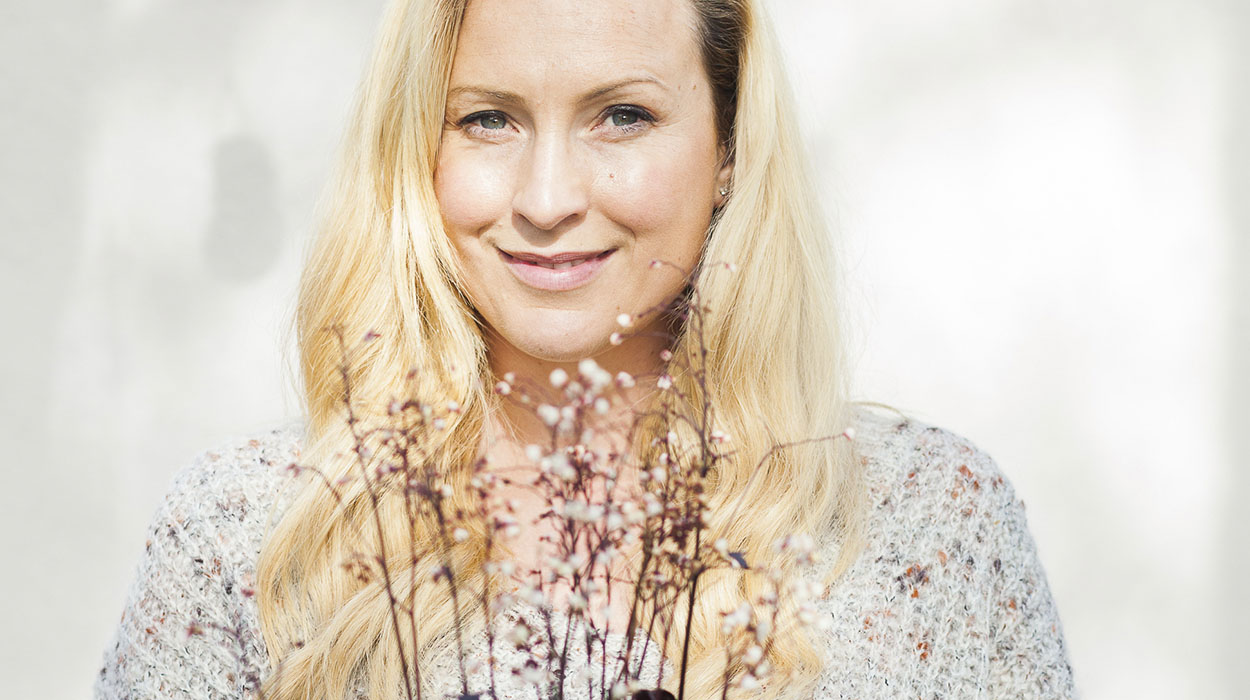 2. Witchcraft invisibility powders and flying ointments.
Poisonous plants often have wonderful magical associations, think of the fairies living inside our native foxglove for example, and the Helleborus orientalis has some stories of its own. In the middle ages the flowers of the Hellebore were strewn over the floor of houses to ward off evil, especially the evil of witches. The flowers, which are said to have hallucinatory qualities, were used in witchcraft for many purposes from deadening of pain to creating a special powders which was both considered a ‘flying ointment’ as well as causing invisibility. 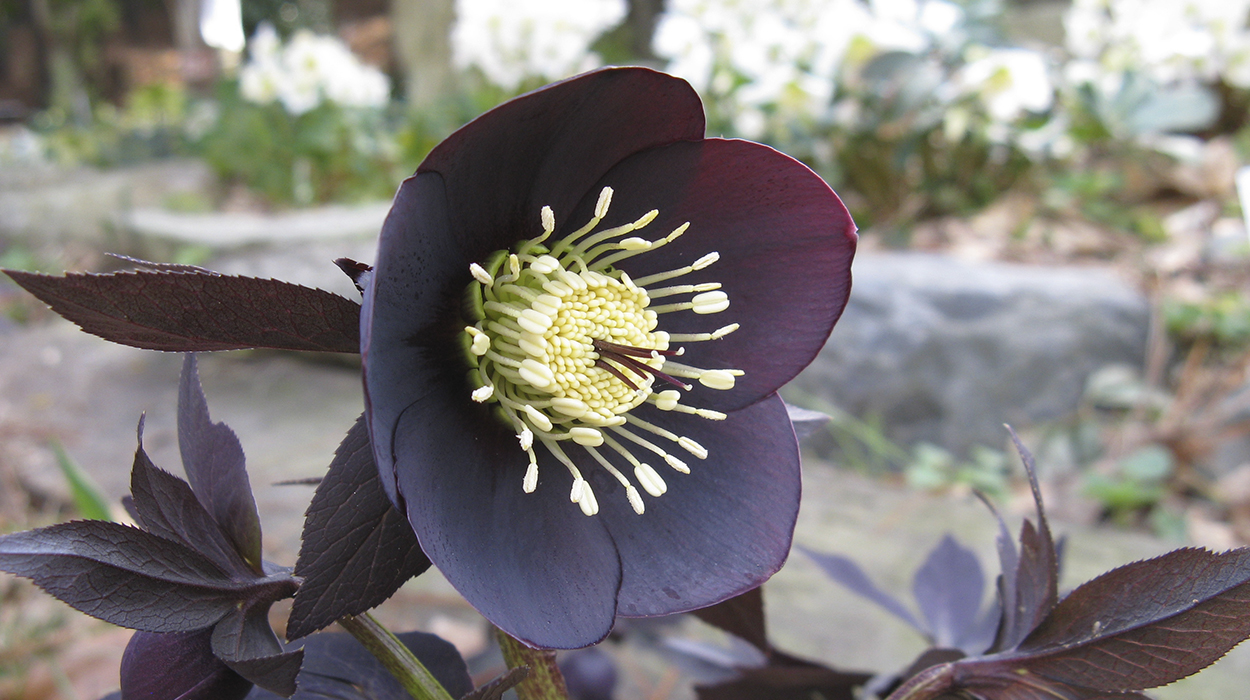 3. The curious smell of Corpse

The largest flower on earth is the flower of the Rafflesia arnoldii which is a species of flowering plant native to the rainforests of Sumatra. This flower is famous for producing the largest single flower in the world with a span of up to 1 meter in diameter and it can weigh up to 11kg! Despite its fascinating appearance and stunning scale, this rare flower has a pungent and highly unpleasant scent similar to decaying flesh, earning it its nickname: the ‘corpse flower’. Best left to the wilds of the tropics! 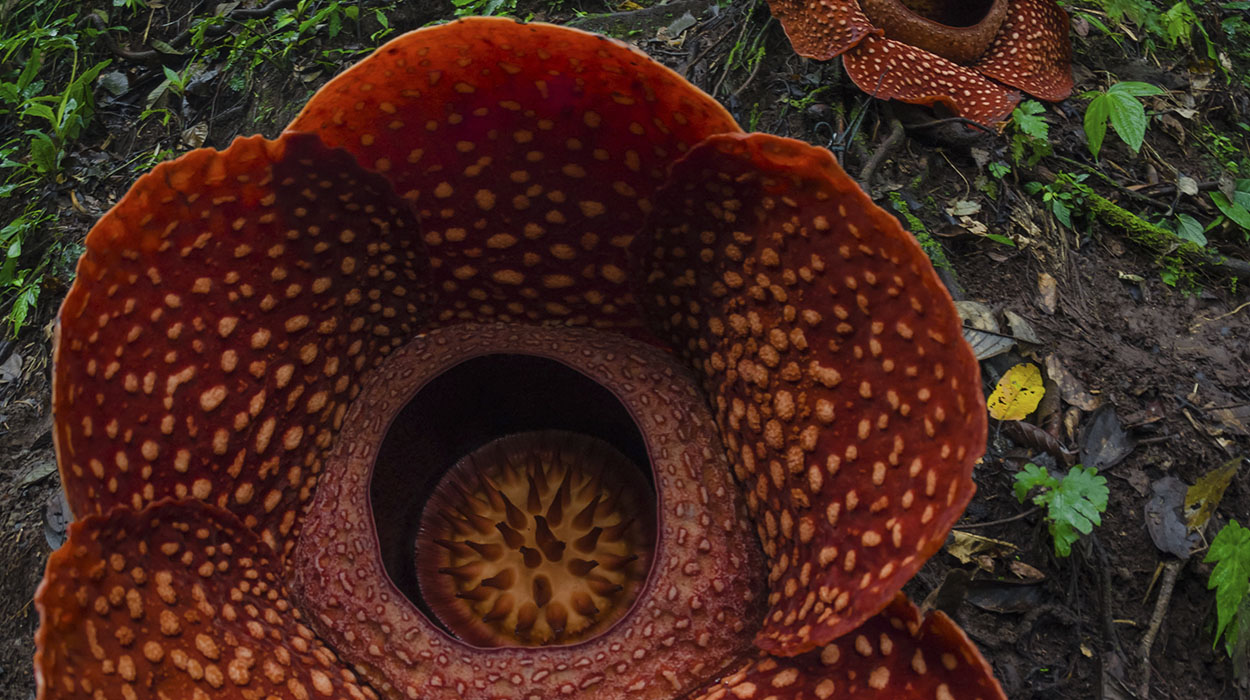 4. Deadly Poisons
However beautiful or innocent looking- there are many plants in the ornamental garden and the wild which have some degree of poison. From hellebores to foxgloves, water hemlock to the innocent looking Lily of the Valley, daffodils and rhododendron and even the most delicious looking rhubarb leaves. Ornamental shrubs which look pretty in the garden can also have some deadly effects when eaten. The castor oil plant- Ricinus communis – contains a toxin called ricin (Breaking Bad fans will know all about this),  a toxin which kills humans by interfering on the basic chemical processes needed to sustain life- cell metabolism. Even the pretty Hydrangea in your granny’s garden contains a poison- cyanide! But don’t worry, you’re need to eat quite a bit of the plant for it to have any effect. Scary stuff nevertheless. 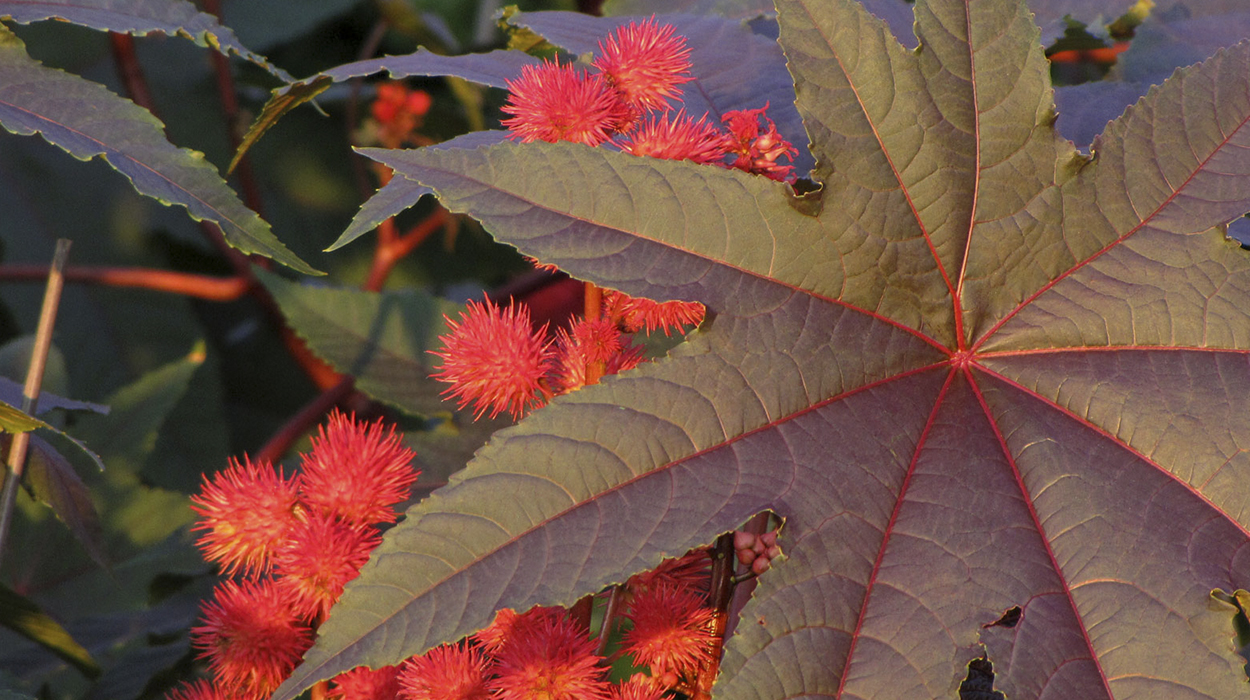 The herbaceous perennial flower Wolfsbane -or Aconitum napellus- has a long history of being associated with warewolves and and in many tales the plant is used to deter or kill werewolves. These legends most likely stem from the fact that Aconitum napellus is incredibly poisonous and was historically used by warriors to coat weapons to poison enemies or lay poisoned bait to kill predators-in particular wolves on the hunt for food. The plant is also known as ‘Monk’s hood’ and the more sinister ‘Devil’s helmet’ and ‘Queen of poisons’ and while it looks pretty and does grow in many ornamental gardens- this plant should never be touched with bare hands. Both the roots and the leaves contain a neurotoxin which can be absorbed through the skin and symptoms of poisoning include tingling and numbness at the point of skin contact and severe vomiting, diarrhoea and even death if it has been eaten. Not just a werewolf deterrent then! 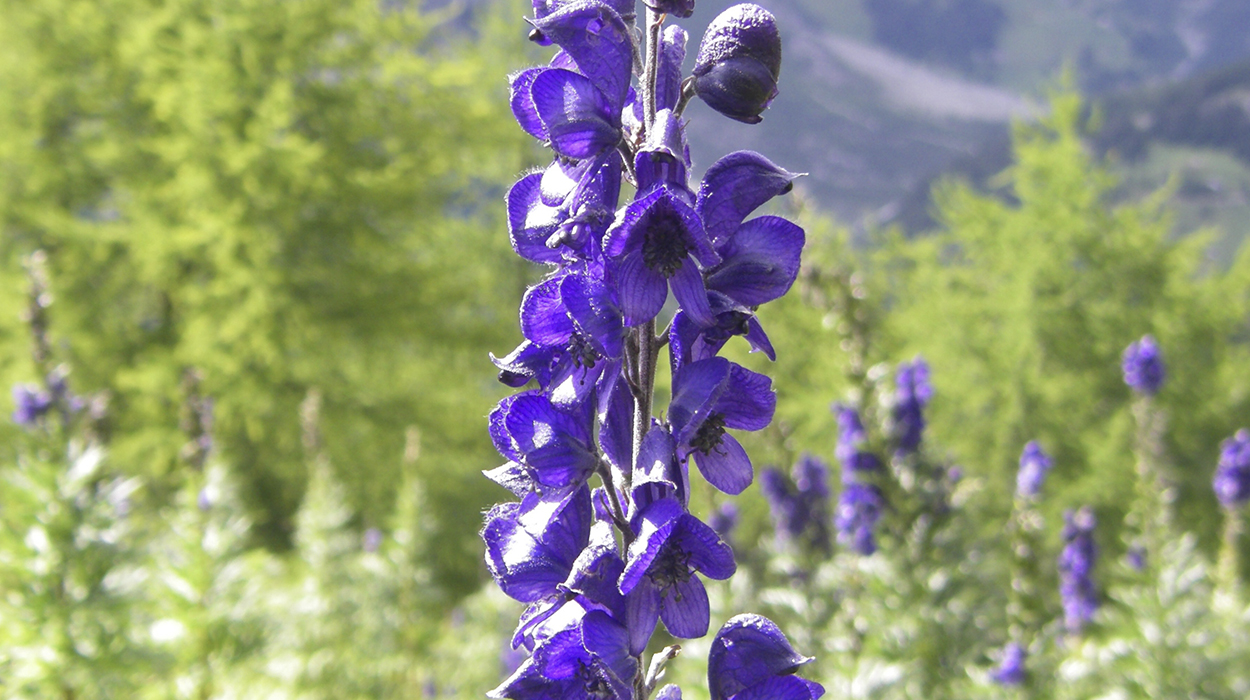 6. Seduced by the Devil

In the middle ages the Belladonna -Deadly Nightshade (Atropa belladonna)- was believed to be the devil’s favourite plant. It is a member of the same family as tomatoes, aubergines, potatoes and peppers and while this makes you think it may be edible it is in fact deadly posionous. The small berries certainly look pretty and it is understandable that they may be mistaken for blueberries or small dark tomatoes as the foliage even looks similar to tomatoes. Juts eating as little as two to four berries can kill a child so one to tell the kids to avoid! Fascinatingly the name belladonna is derived from Italian for ‘beautiful woman’ and the plant was used in eyedrops in Renaissance times to dilate the pupils of the eyes to make women look more seductive. I wouldn’t try it as a seduction technique though as it is also said to cause eventual blindness! 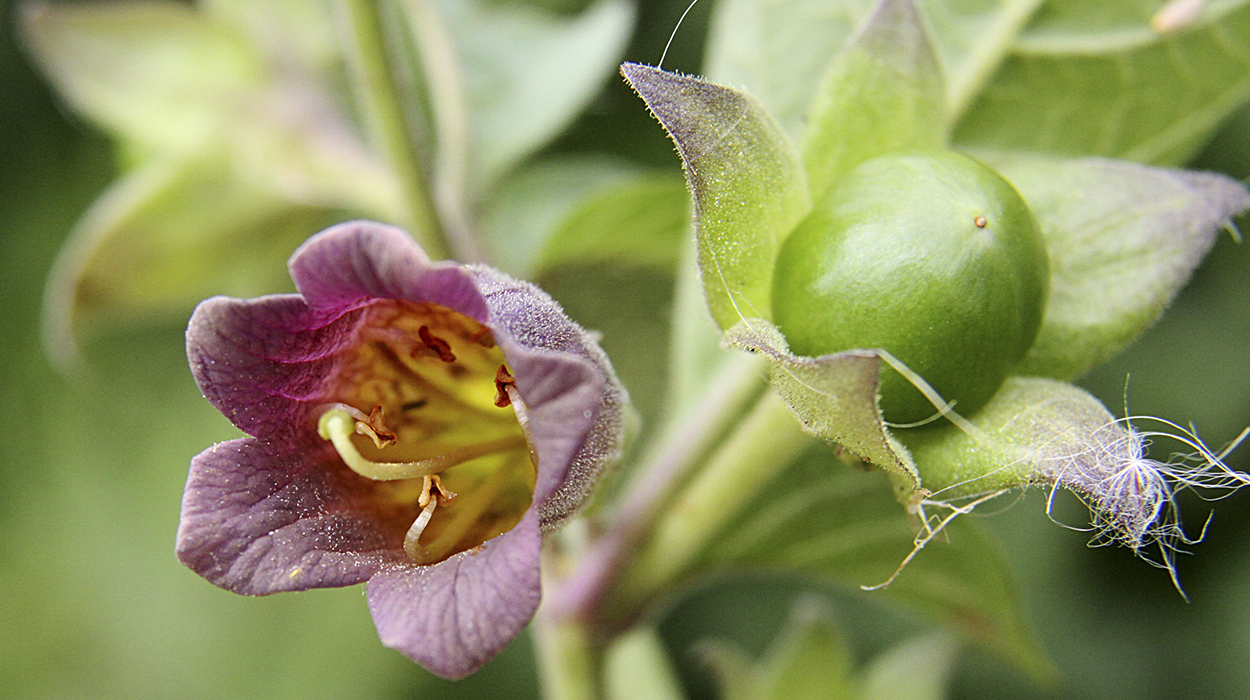 The Actaea pachypoda plant has a distinctly Stephen king feel to it!
This rhizomatous herbaceous perennial is native to North America and is also known as the white baneberry. It is a popular bushy plant to grow in a woodland border with subtle natural flowers in Spring and rich green foliage. It is when the berries emerge that this shrub takes on its creepy look. The small berries which are toxic are clustered together to make them look like massed of creepy china doll eyes. Imagine walking by hundreds of these doll eyes in a dark forest at night? 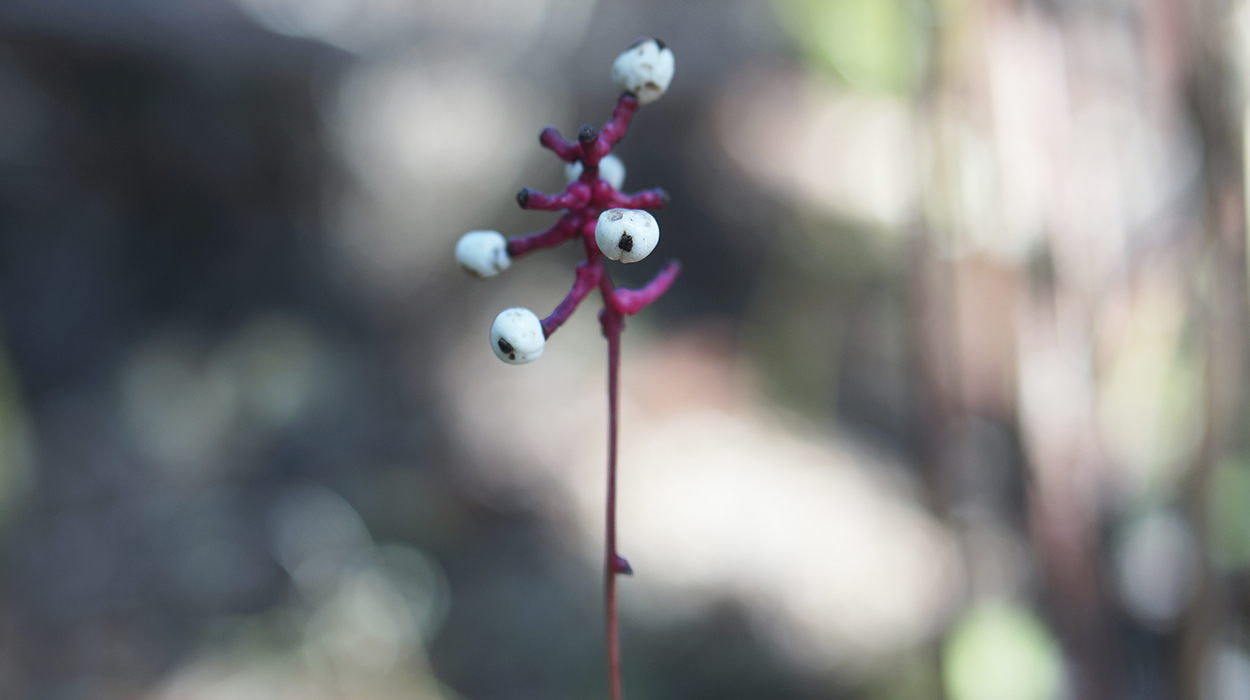 8. Skeleton Cage
Finally, a plant which, while it does look a little spooky, won’t cause death when ingested. Most people will know chinese lanterns –Physalis alkekengi- as the pretty little orange fruits with paper like coverings available in supermarkets and grocery shops. The berries which are also known as ground cherry, Inca berry or cape gooseberry are often served in restaurants with dessert and their tart sweet flavour is delicious with other fruits or chocolate. These edible berries have been used in medicine to reduce fevers and they are a wonderful addition to the edible garden. At time time of the year their colour and shape are somewhat reminiscent of pumpkin. After a while the gorgeous delicate papery surround on the berries will disintegrate partly to become a spooky skeletal frame, holding the ripe berry trapped inside it. 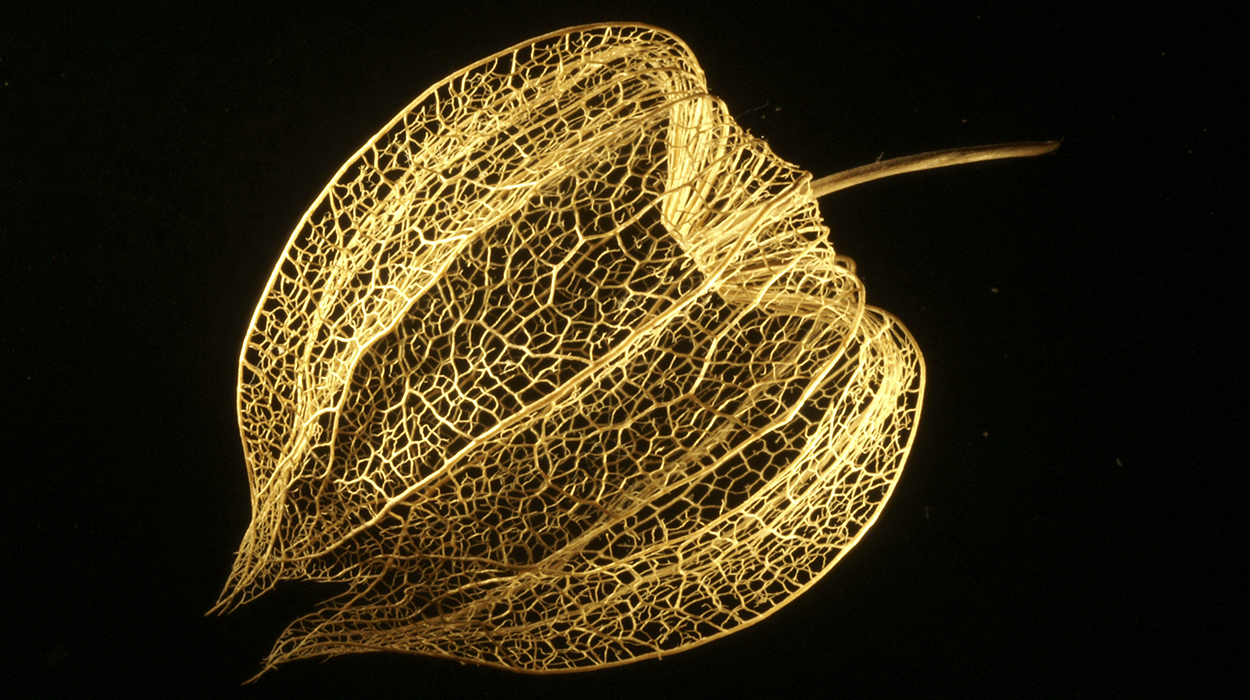