There is no plant I know as beautiful and sensual as an tropical orchid. Perfectly elegant and reminiscent of warmer climes, these flowers are such wonderful additions to the window sill in colder months, with many blooming in the depths of Winter. The most common orchids available here in Ireland would probably be the relatively robust Phalaenopsis- the Moth orchid. These beauties are native to southeast Asia and are very popular due to their long flowering season and some of these can last for almost four months if they are well cared for.
This orchid comes from the family Orchidaceae which are a fascinatingly diverse and widespread family of plants. Along with the Asteraceaea, these are one of the largest families of flowering plant and the 28,000 accepted species have a staggering variety of colours, forms and fragrances. From our Irish native orchid- the Dactylorhiza occidentalis or Marsh orchid to the Cattleya lobata or Lobed Sophronitis which only grows on the surface of rocky cliffs facing the ocean near Rio de Janeiro, orchids have endless varieties so diverse it’s hard to believe they are in the same family.
On closer inspection however the similarities are most definitely apparent. The floral morphology in orchids is truly fascinating thing to look at. Orchid flower range in size from tiny pin-head size to wide 20cm in diameter blooms and their flowers come in pretty much all colours. Some stems carry only one flower while others may carry hundreds on the one stem. Interestingly the floral structure of all species is very similar and also very distinct from other botanical families. The flowers have three sepals and three petals, two equal and one different, called ‘the lip’. The orchids reproductive structures, both male and female, are grouped in a column just above the lip which acts as a landing track for pollinators to the plant. In the wild, most pollination occurs by bees and wasps but moths and butterflies, flies, ants, beetles, and even birds and bats can be pollinators to these flowers. The pollinator enters the flower in search of food and as it leaves it touches the male part of the column -the anther- and carries the pollen to the female part of the same flower which is called the stigma. 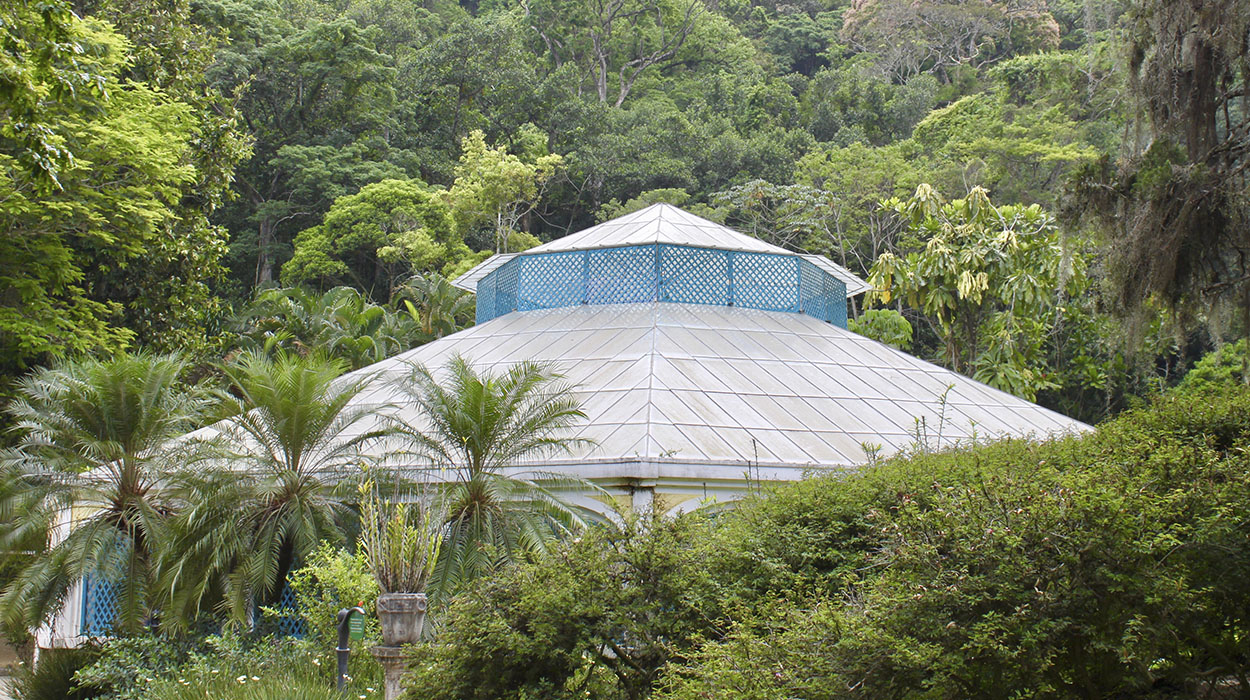 One absolutely fascinating place to see an impressive collection of tropical orchids is a place I visited in 2015, the Jardim Botanico, or Botanic gardens in Rio de Janeiro. With Brazil being the home to many varieties of tropical orchid, these vast gardens on the edge of Tijuca rainforest are a wonderful showcase of these flowers in their natural habitat. Interestingly orchids seem to spring up everywhere in this part of the world, testament to how ideal the humid climate is for these flowers. Throughout the bustling city of Rio orchids grow literally on the barks of trees and cling to the tiniest crevices in rocks thanks to their aerial roots which feed of the high level of moisture in the humid air. The Jardim Botanico and their orchid collection is stunningly set in a pure white glasshouse, a perfect backdrop for the colours of the flowers that do so well in this part of the world. 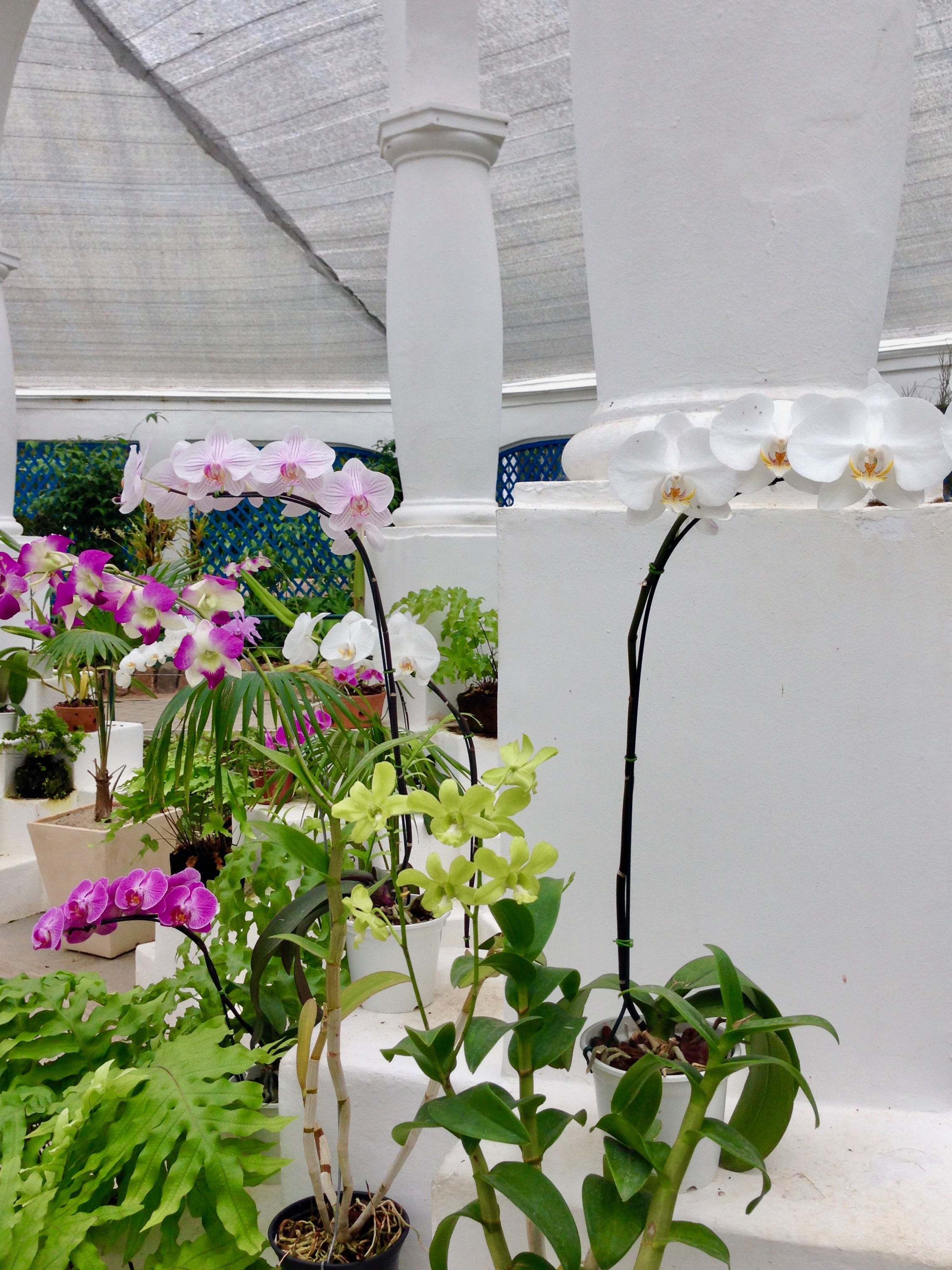 Aside from their visual beauty orchids are fascinating when it comes to the olfactory and tactile characteristics. Many orchids are scented and the scents vary from pleasantly sweet ones of lilac and honey such as the Prosthechea fragrans to the downright foul such as some varieties of the Bulbophyllum which are said to smell like dead rotting flesh. The Oncidium Sharry baby is reminiscent of chocolate while the Bryobium hyacinthoidus has a smell close to that of bleach.
One very interesting fact is that historically orchid flowers have been known to treat all sorts of illnesses. For many centuries the sensual looking flowers have been used for everything from curing sexual disorders to making love potions and magic teas as well as being prescribed as an aphrodisiac. Particularly in the middle ages these flowers were used to awaken and stimulate sexual desire, virility and fertility.
When it comes to the culinary world the only orchid that has significant uses is the vanilla orchid -Vanilla planifolia, which is native to Mexico. Due to its potent sweet scent this orchid is also the one that is used in perfumery. These relatively un-showy orchids have greenish-yellow flowers that last for only one day and when they are cultivated for the Vanilla trade they must be pollinated by hand if they are to produce a steady rate of fruit. In the wild there is less than 1% chance to the flowers being pollinated. It is no wonder Vanilla beans are pricey!
Caring for Orchids
Many people find orchids tricky plant to care for and think they are fussy about soil and moisture as well as temperature. In fact, the most widely available orchids here are generally the Phaleonospis or Cymbidiums and these are actually relatively easy to care for if you know how. I have personally found that the magenta pink varieties of Phaleonopsis are much more straightforward to grow than the more elaborate speckled white or yellow varieties. Growing these Phals- as they are often called- on a moderately sunny windowsill is best for glossy leaves as well as an abundance of flowers. As for watering, I tend to think of how the native climatic growing conditions are. Their native southeast Asian climate has plenty of moisture in the air so spraying the leaves with a light dusting of water is not a bad option. For some of my orchids I like to give them a shower every now and then, I know it sounds crazy but my Cymbidium or Diva Orchid loves this and flowers prolifically for months. A definite rule is that no orchid should sit in water as this will rot their roots so make sure that they have a pot that allows water to escape. Phals actually grow in light and airy fir bark not soil to allow the roots, which are actually aerial roots, to breathe. They also seem to really enjoy plastic pots and if you, like me, are not keen on the unsightly ones that most orchids come in have a look at the lovely Brussels range of orchid pots from the Elho brand which are available at Woodies. These have very clever recessed bases to ensure that any excess moisture can drain away from the plants roots. 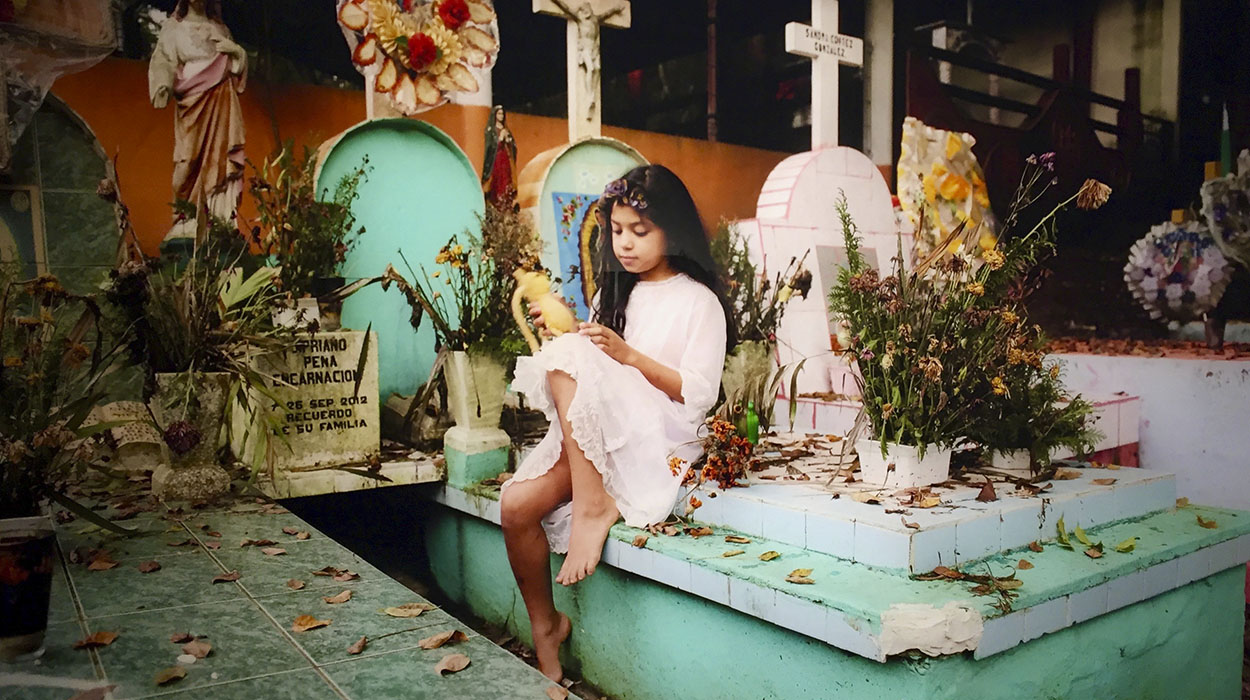 Visit: ‘Reconstructing memory’
Flowers, skulls and Mexican colour: A fascinating exhibition
The current exhibition at the popular Model Gallery in Sligo town is one which is both visually stunning and breathtakingly haunting. Exploring the relationship between Mexican death traditions and the western idea of burial, mourning and commemoration the artist Cléa van der Grijn presents an exciting and multifaceted experience for the visitor. Containing an impressive variety of artworks in many mediums as well as a multitude of collected artefacts from Mexico, this exhibition is as beautiful as it is poignant. Particularly fascinating is how the tricky subject of death is explored through the most visual and beautiful mediums, from a film where we see a beautiful young Mexican girl skip through a colourful tropical graveyard as though she is perfectly at home, to the dark central room where an altar holds a perfectly curated collection dried flowers and special artefacts, the topic of death is really brought to life in a vibrant way. From stunning sound effects which make you feel like you are surrounded by the rainforest, to ambient lighting effects and fascinating changes of temperature throughout the spaces to emulate the cold air of a church, this exhibition is definitely worth seeing. 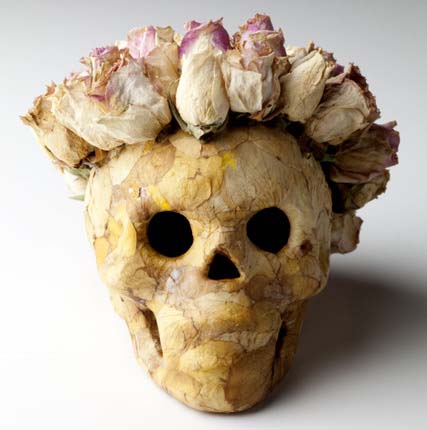 Don’t miss the Masterclass:
On the 25 of February the artist Cléa van der Grijn will lead a masterclass discussing the concept and process behind the above exhibition. The class runs from 10.30am to 4pm and costs €70 or €60 with a concession for more go to www.themodel.ie