Who loves dahlias? I am delighted to welcome you to the sixth edition of my wild ėden magazine. This month we delve deep into a topic which I am sure so many of you are as obsessed with as I am…the beauty of the incredible dahlia. Why the flowers which hail from South America seem to bring out such a fascinating obsession in so many of us…. and how the power of these plants can be brought into your garden and home. I have been absolutely obsessed with my own dahlias- which I grew myself for the first year -and they are not an easy plant…..but wow are they rewarding! Inspired by these fascinating diva plants this issue is all about learning about the plants roots (literally and figuratively) how to include them in your own scheme, Annette Coleman’s garden in County Sligo and much more.

Let’s dive into the dahlia! 🌸

Join w|ė and let’s celebrate a wild and beautiful lifestyle in our everyday. 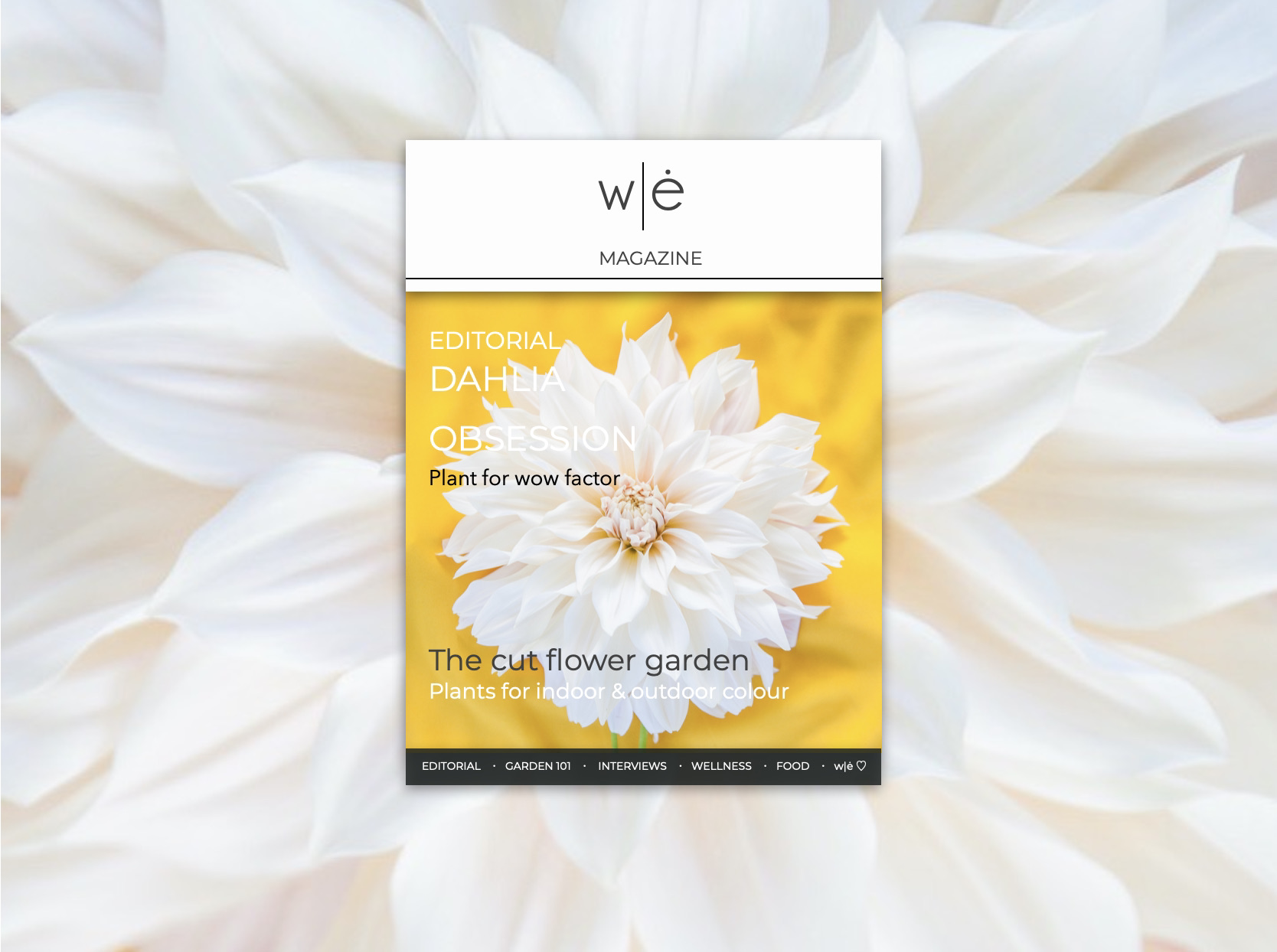 Let’s Explore the Dahlia
Looking at Dahlias you simply cannot help but admire their floriferous display. One of my favourite flowers for the Summer border, the beautiful South American native has so many faces. There are about 57,000 RHS registered cultivars of Dahlia and it is generally the hybrids that are available as garden flowers. The RHS lists fourteen groups of Dahlia and these are grouped by their flower shape. From simple open shapes to elaborate, almost geometrically perfect pom-pom configurations there are endless shapes, colours and cultivars to choose from for your garden. But before we look at these from a design point of view, let’s explore their interesting history. 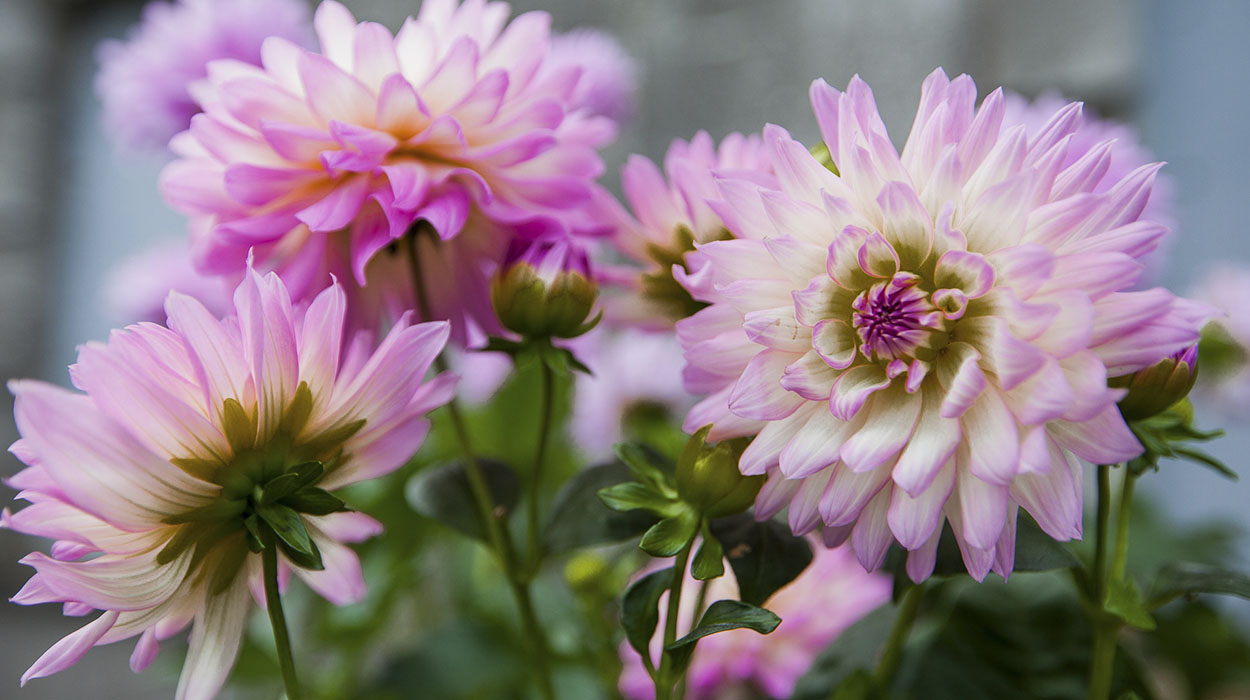 These tuberous perennials hail from Mesoamerica- and are native to Mexico but they can also be found growing in Honduras,  Nicaragua, Guatemala, El Salvador and Costa Rica and in 1963 the plant was declared the National Flower of Mexico. Varieties of this flower were first discovered by Europeans when King Phillip II of Spain sent Francisco Hernandez, a physician to the crown, to Mexico to study plant life and the bountiful resources of the country. Interestingly one of the first varieties of the plant that his team came across was the Tree Dahlia-Dahlia imperialis- which has huge hollow stems which can grow up to over 6 metres in height. The Aztecs named this plant ‘Cocoxochitl’ which translates as ‘Water Cane’ or and this was due to the fact that the stems were hollow and could be used to transport water for Aztec hunters. The plant was also used as a source of food and the Aztecs gathered it from the wild and also cultivated it themselves. It was also interestingly used for many medicinal reasons, among them to treat Epilepsy. 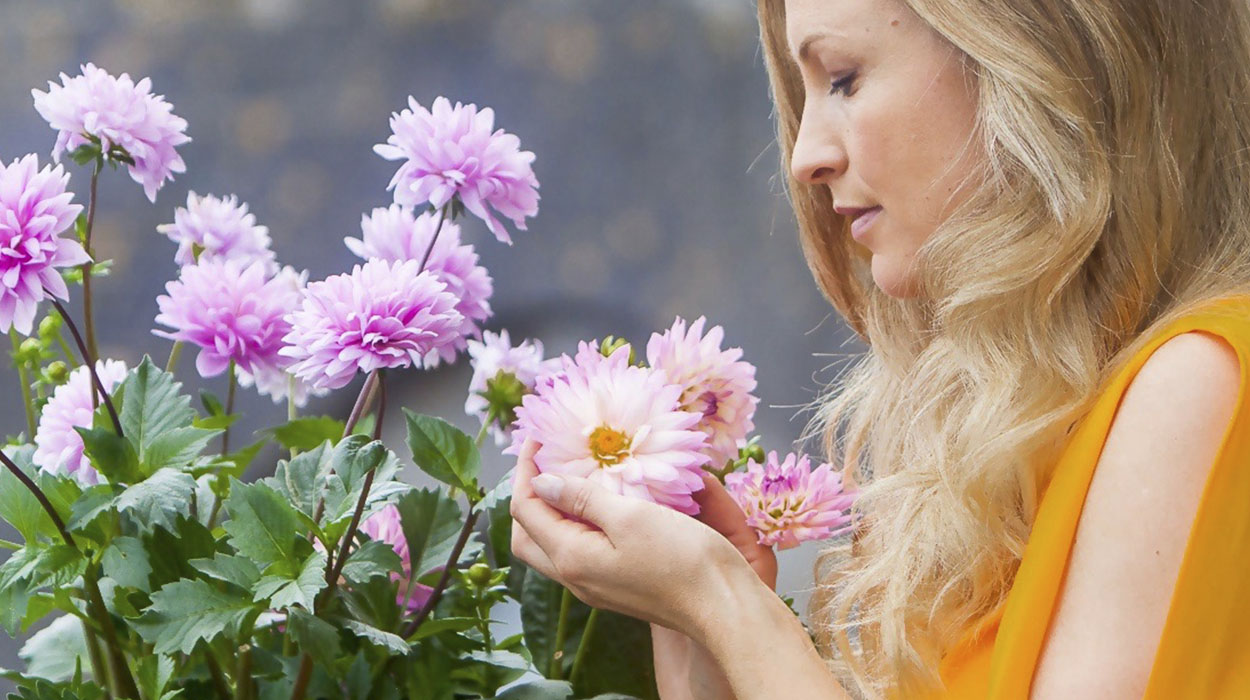 Even today the Dahlia is a staple ingredient in Oaxaca cuisine and is grown for the large tubers-reminiscent of sweet potatoes- as well as being used for producing Dacopa, an extract using roasted tubers whose intense mocha like taste can be used to flavour beverages. 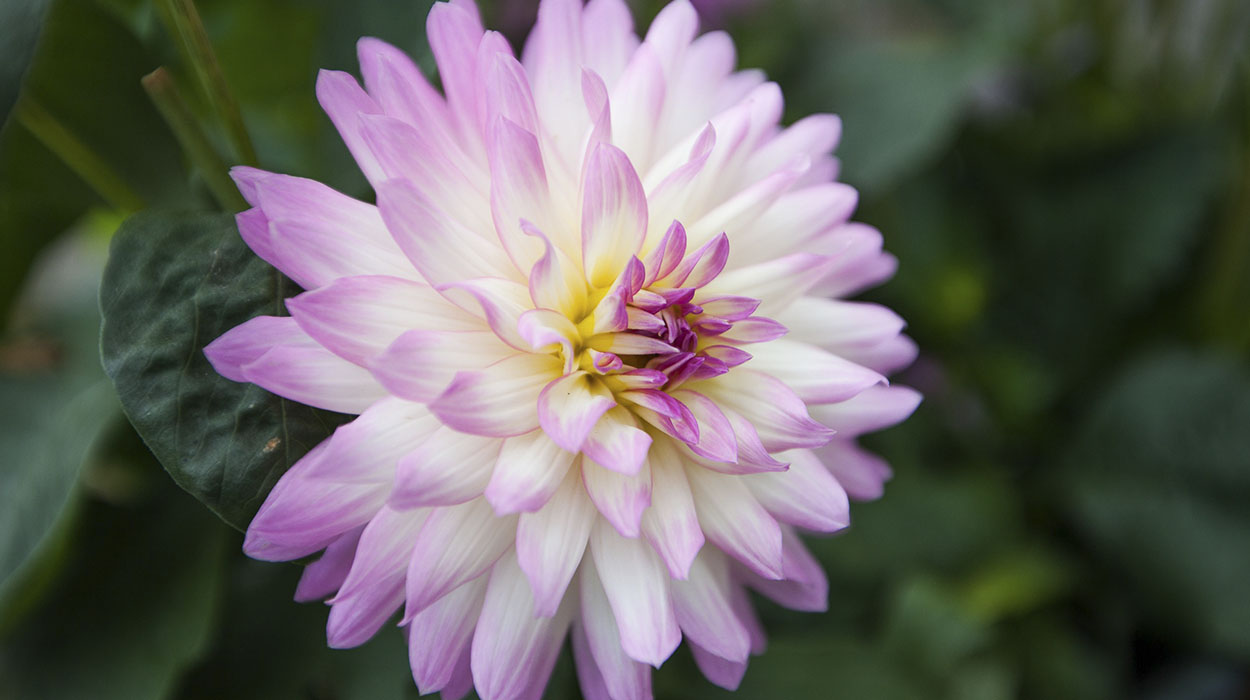 In the garden, dahlias are such wonderful plants. The Dahlia maxi in the main picture here is a new breed that is incredibly strong and visually stunning. Available in many colours, the flowers are beautifully shaped pop-pom shaped flowers which are so perfect they almost seem unreal. The abundance of flowers on one plant is another major plus and I love how when one flower stops blooming many more soon follow to keep the plant looking fresh and full. Keep in mind, for the best display dead-heading here is essential. 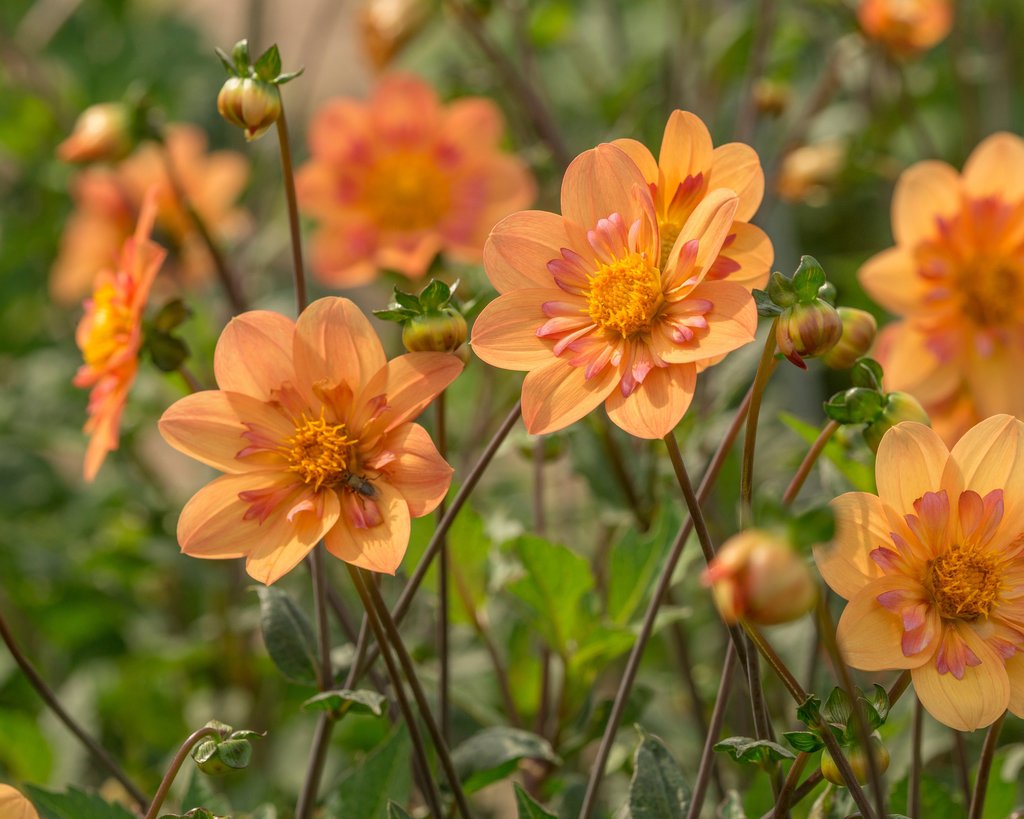 Having said that, one must keep in mind-Dahlias are not the simplest plants to grow.  The tubers should be lifted at the end of the season and stored in a dry dark place over Winter so that are not killed off by frost. This makes them a plant that requires more maintenance than some other perennials. Most people who love these plants will agree that the role this plant plays in the border is well worth the effort and I have seen many people fall in love with these specimens once they flower.

They really are a fabulous plant to scatter in the garden for pops of colour where there may be a gap. One other thing to look out for here is slugs- Dahlias can be totally destroyed overnight if not protected, particularly early in the seasons when the leaves are still emerging and soft. I like to scatter a few copper coins around the base as slugs don’t like copper! 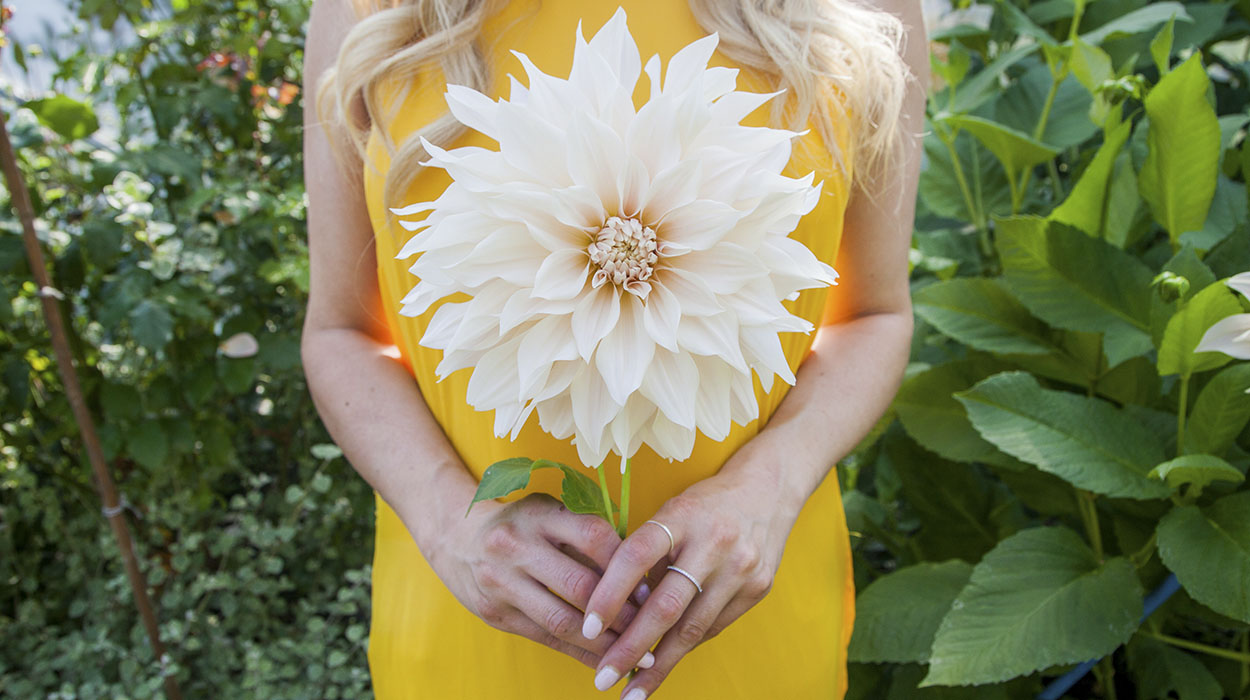 RHS grouping system
With so many cultivars to choose from, the Royal Horticultural Society officially registers the cultivars of Dahlia. The method used here relies on flower shape. Here is an overview of the fourteen shapes according to the RHS database.
Group 1 – Single-flowered dahlias (Sin). Flower has a central disc with a single outer ring of florets (which may overlap) encircling it, and which may be rounded or pointed.
Group 2 – Anemone-flowered dahlias (Anem). The centre of the flower consists of dense elongated tubular florets, longer than the disc florets of Single dahlias, while the outer parts have one or more rings of flatter ray florets. Disc absent.
Group 3 – Collerette dahlias (Col) -Large flat florets forming a single outer ring around a central disc and which may overlap a smaller circle of florets closer to the centre, which have the appearance of a collar.
Group 4 – Waterlily dahlias (WL) – Double blooms, broad sparse curved, slightly curved or flat florets and very shallow in depth compared with other dahlias. Depth less than half the diameter of the bloom. An example are is the ‘Cameo’ variety.
Group 5 – Decorative dahlias (D) – Double blooms, ray florets broad, flat, involute no more than seventy five per cent of the longitudinal axis, slightly twisted and usually bluntly pointed. No visible central disc.
Group 6 – Ball dahlias (Ba)-Double blooms that are ball shaped or slightly flattened. Ray florets blunt or rounded at the tips, margins arranged spirally, involute for at least seventy five percent of the length of the florets. Larger than Pompons.
Group 7 – Pompon dahlias (Pom) -Double spherical miniature flowers made up entirely from florets that are curved inwards (involute) for their entire length (longitudinal axis), resembling a pompon.
Group 8 – Cactus dahlias (C) -Double blooms, ray florets pointed, with majority revolute (rolled) over more than fifty percent of their longitudinal axis, and straight or incurved. Narrower than Semi cactus.
Group 9 – Semi cactus dahlias (S–c)-Double blooms, very pointed ray florets, revolute for greater than twenty five percent and less than fifty percent of their longitudinal axis. Broad at the base and straight or incurved, almost spiky in appearance.
Group 10 – Miscellaneous dahlias (Misc) – not described in any other group.
Group 11 – Fimbriated dahlias (Fim) -ray florets evenly split or notched into two or more divisions, uniformly throughout the bloom, creating a fimbriated (fringed) effect. The petals may be flat, involute, revolute, straight, incurving or twisted.
Group 12 – Single Orchid (Star) dahlias (SinO) -single outer ring of florets surround a central disc. The ray florets are either involute or revolute.
Group 13 – Double Orchid dahlias (DblO) — Double blooms with triangular centres. The ray florets are narrowly lanceolate and are either involute or revolute. The central disc is absent.
Group 14 – Peony-flowered dahlias (P) — Large flowers with three or four rows of rays that are flattened and expanded and arranged irregularly. The rays surround a golden disc similar to that of Single dahlias.
Source: Royal Horticultural society/ Wikipedia

w|ė MAGAZINE is an online wild based lifestyle magazine which brings monthly stories, knowledge and recommendations to you, all based on a wild and beautiful approach. w|ė will explore and celebrate topics which resonate with people, to bring an awareness to current issues we face in our shared wild spaces and to connect with like-minded people globally.

There will be interviews with inspiring creatives- designers, architects, chefs, writers, psychologists, doctors, and wild thinkers, creators and dreamers. Through gardens, food, wellness, health and inspiring stories for wild living, we will also link to courses in wild design and lifestyle and have exciting news soon on creative collaborations with incredible wild inspired people and brands.

Join w|ė to celebrate a wild and beautiful lifestyle in our everyday.

The Wild Table at Eccles