Most of us know the lovely herbaceous perennial Lupin as a useful addition to the garden border. A very pretty plant with textured leaves and candelabra shapes flowers, it is one  that adds great colour and useful verticality to a planting scheme. Not many people however know the interesting history and fascinating uses of this plant in the culinary world. The Lupin or Lupine as it is known as in its native North America is a plant which is part of the legume family and includes over 200 species which is originally native to the Mediterranean region. The seeds of this plant have been used as food as far back as 6000 years ago in the highlands of the Andes in South America.

While the seeds come from the same family as peas, soybeans or lentils it is worth noting that there are two types of Lupins from a culinary viewpoint. The sweet Lupin and the bitter Lupin. The bitter Lupins have a certain toxicity and need to be soaked in water and then boiled to remove the bitter alkaloids. 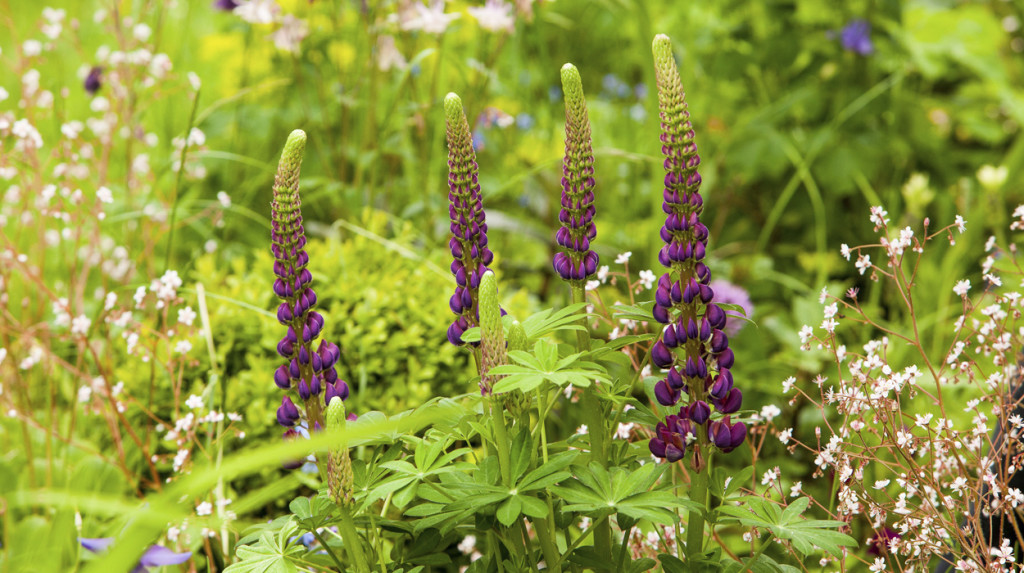 Interestingly many countries worldwide have a way of processing Lupin seeds for food. While it is mostly used for feeding livestock, food trends in embracing cultural heritage and ancient traditional staples has seen a real resurgence in rediscovering this plant as a valuable and delicious culinary one. The Lupin beans or seeds are a great source in Omega-3 and -6 fatty acids as well as being full of polyunsaturated fats making it a crop that not only grows easily in poor soil but, according to German scientist Dr. Peter Eisner of the Fraunhofer Institute for Process Engineering and Packaging IVV in Freising, Germany, could hold a very promising solution to the needs of our ever growing world population.

An added benefit here is that the seeds of the plant have an astonishing shelf-life. Seeds from an Arctic species of Lupin were successfully germinated after being stored in Lemming burrows for 10,000 years! Even in the first century BC the Lupin beans were sold as snacks in the streets of Rome and Pliny the Elder wrote of them in his Natural History. Of the pretty and delicious plant he writes the following: ‘No kind of food is more wholesome and light in digestion than the white Lupin when eaten dry, If taken commonly at meals, it will contribute a fresh colour and a cheerful countenance’.

If you’re interested in some ‘cheerful countenance’ yourself by using these plants as an edible source it is worth noting that some varieties need far more preparation than others. The bitter Lupins need to be rinsed numerous times to ensure that the high levels of toxic alkaloids are removed. It is however possible to buy the seeds online where they are clearly labelled as ‘Edible Lupins’ and ‘Toxic Lupins’, the latter of which make fantastic garden plants but should not be eaten. I just ordered a variety of seeds such as the Lupinus alba, Lupinus mutabilis ‘Imbabura Tarwi’ and Lupinus affn. angustifolius ‘Ludmilla’ and ‘Nabah from Cairo’on the site  www.rareseeds.com which delivers internationally. I can’t wait to get my seeds and get sowing, growing and harvesting! 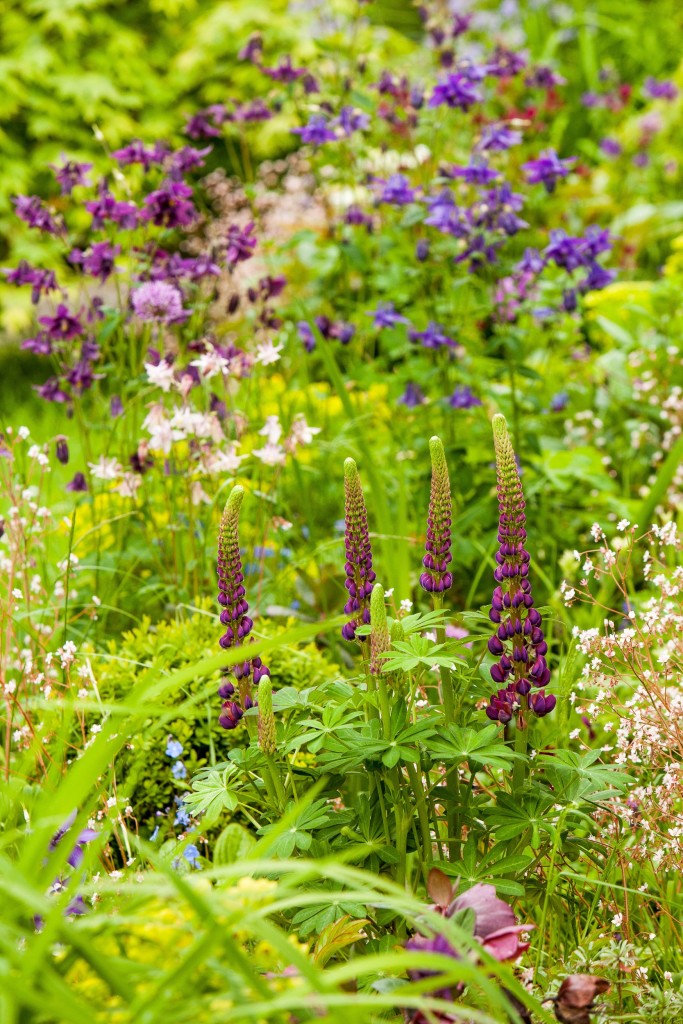 Loopy for the Lupin

My favourite Lupin story is one that takes us to Germany in 1917 where a German Professor, Dr. Thoms, held a Botanical gathering in the town of Hamburg and managed to use the plant for many inventive and unusual uses. His ‘Lupin Banquet’ consisted of Lupin soup served on a tablecloth made from Lupin fibres. The main course was Lupin Beef Steak and was roasted using Lupin oil and Lupin seasoning. To accompany he served Lupin bread as well as Lupin margarine and cheese and to finish there were Lupin coffees and even Lupin liqueur. Not content with a full meal of Lupin goodies he also gave the guests Lupin soap to wash their hands with after the meal as well providing writing paper with envelopes that used Lupins as an adhesive. This was one event that sparked a surge of interest in the lovely, and undoubtedly very useful flower. Now that’s what I call clever botanical branding

There’s something about the colour magenta. This wonderful mix of red and violet is both warm and regal and is a very harmonious colour in design. One thing about it that it works so well to off-set the colour green. Limes green and deep rich forest green are the perfect balance to the energetic and strong hue featured in the main Lupinus ‘Masterpiece’ here. If, like me you love your purples, pinks and blues then Magenta is a great colour to bring these together and add a bridge to complete the complimentary palette.

Here are a few of my favorite plants for the rich royal magenta palette: 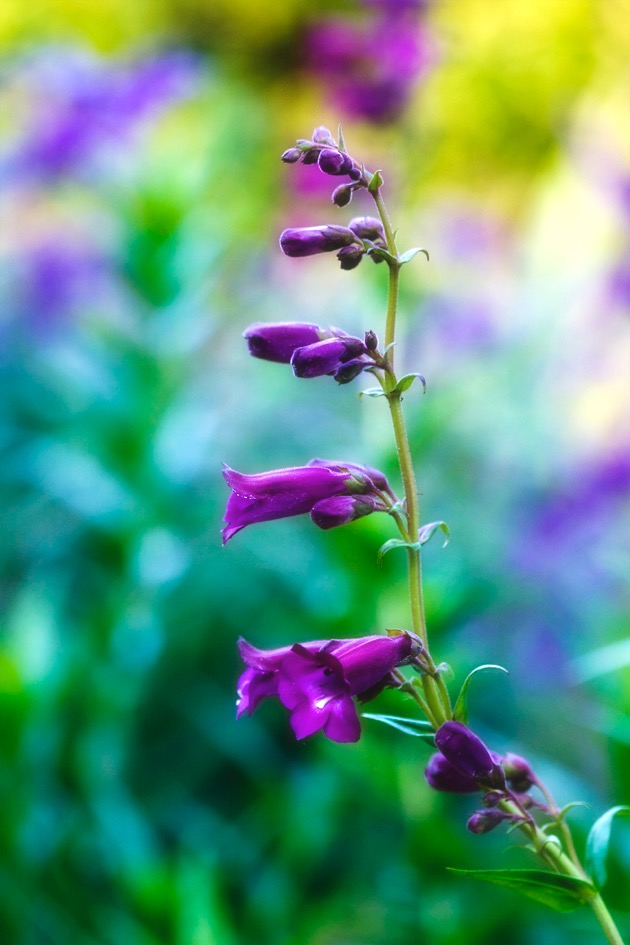 This wonderful easy to grow perennial is a really wonderful plant for the border. The rich colour of the foxglove shaped spires echo the Lupin and yet are looser in shape. They are a great splash of colour in a sunny border and will flower for a long time if dead-headed. 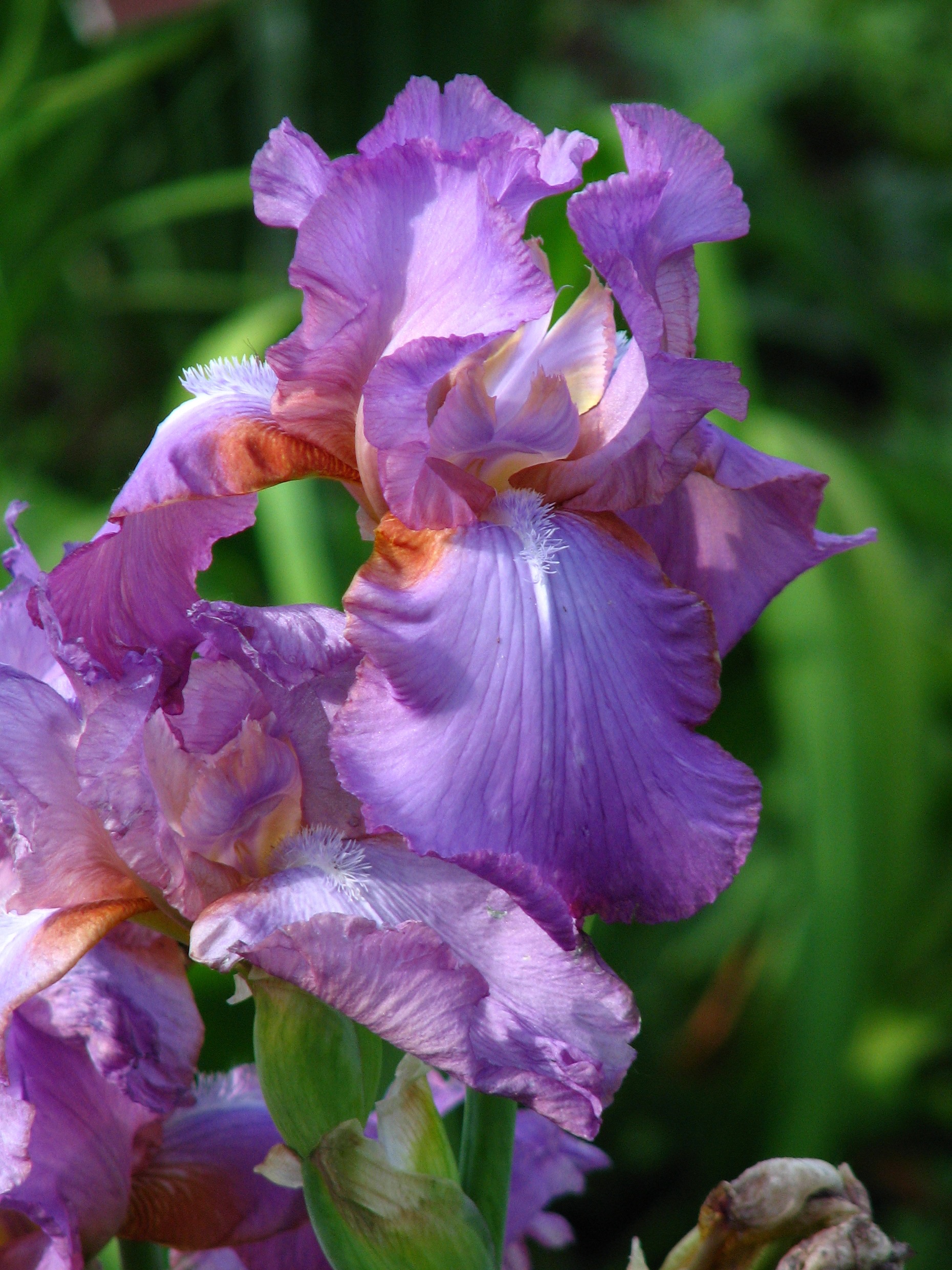 One of my favourite bearded Irises this tall variety is absolutely stunning. Not only does it pick up wonderfully on the Magenta theme it also adds a fantastic fluffy head to a border. Unusual too on these ruffled heads are the chestnut coloured epaulettes on the shoulders of the plant. Divine. 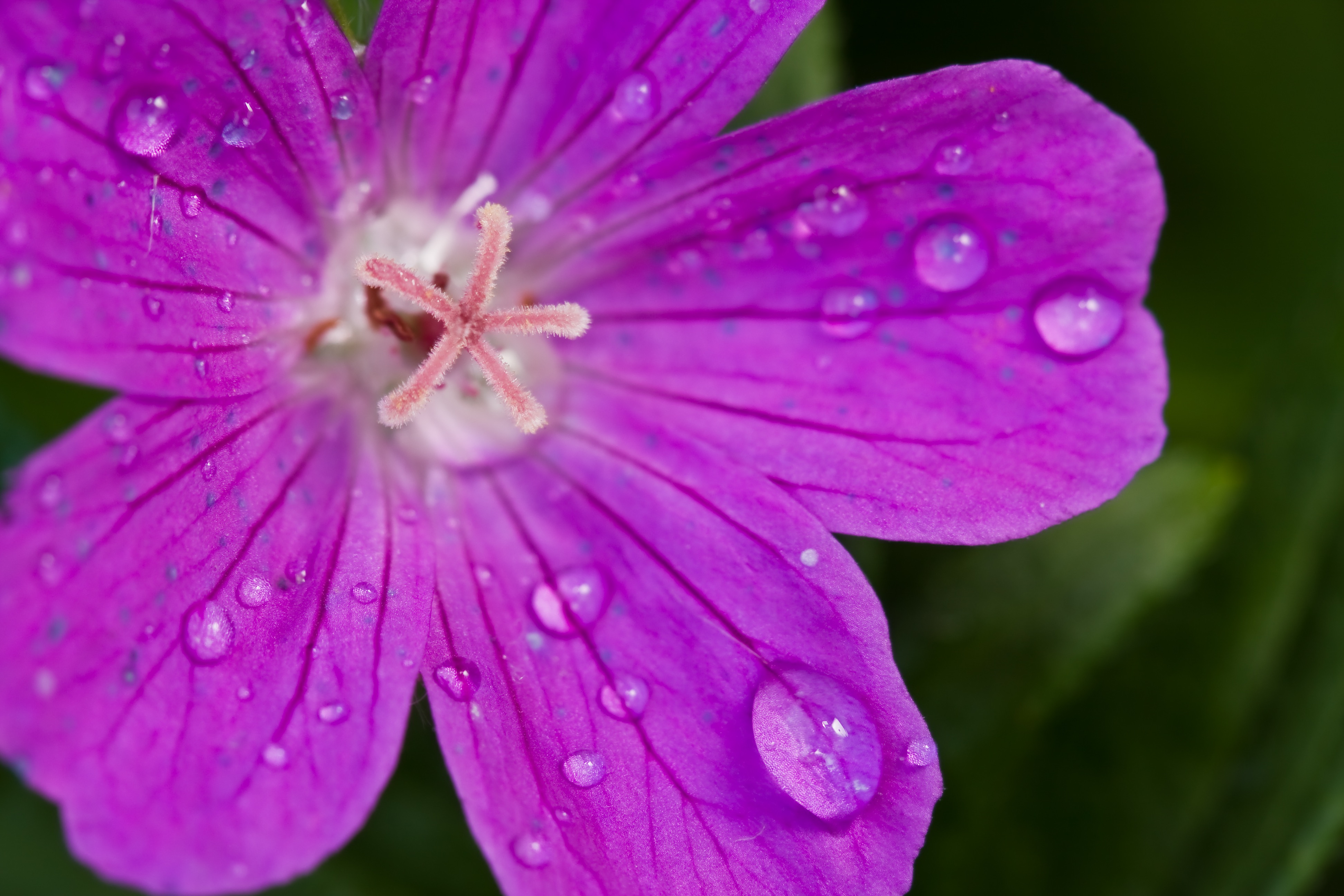 This lovely cranesbill is absolutely covered in small saucer shaped flowers in May and June and has a striking magenta colour. It is a great plant to put at the front of the border as it grows densely and covers ground quite nicely-making it very handy for supressing weeds. 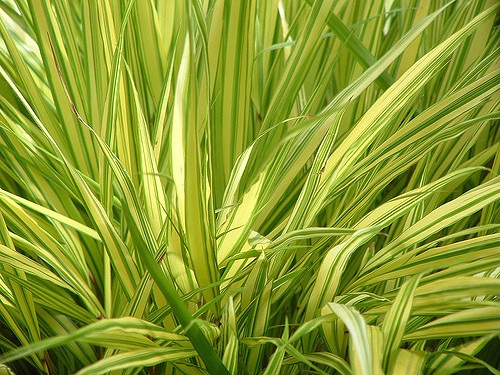 Every scheme can be softened by the addition of grasses. I’m not usually a fan of variegated leaves as they sometimes have a tendency to feel a little artificial but this one is an absolute gem. The Japanese Forest grass is a dreamy lime green and white variegated grass that arches gracefully and forms large, elegant clumps of cascading leaves. It is a wonderful plant to use as an understory plant and in late summer it develops small needle like flowers that rise above the grass.

The Organic Centre in Rossinver, County Leitrim has been long known as a hub of organic growing and education in sustainability. The non-profit company offers ongoing courses and training in everything from sustainable energy to starting a garden from scratch, fermented and cultured foods and trades such as stone walling and willow workshops. I will be holding a Garden Design Course this July which takes you through all the stages of creating a dream garden with your own space through collaboration, brainstorming, dreaming and finally designing a successful and sustainable design for life. The course runs on July 10th. I’m also delighted to have been asked to say a few words at the annual garden party on the 16th of July at the Organic Centre. This party, for which I will be joining the talented Neven Maguire and GIY founder Michael Kelly, is the annual fundraiser runs from 11am-5pm and has some fantastic activities and talks. From soil workshops to homemade pizza from the wood oven this event should not be missed. Tickets cost €15 and can be bought on the centres website www.theorganiccentre.ie

A special thanks to Cuprinol Ireland for the background colours.

Greece to Giverny- a flower with diva qualities

Inspiration from the masters of the Wild