I love the changing of seasons. There is something truly magical about watching the garden gradually change from one season to another. Colour tones shifting in their greens, textures emerging or softening and small explosions of colour surprise. A well designed garden space is a tapestry of ever changing planting which changes gradually, through morphing of shapes, merging textures and of course the constant opening and fading of blooms. Our gardens are a mirror of time and place, giving us endless cycles of beauty to admire.
One of the most important elements in the garden when we think about the changing of the seasons are plants which have the ability to bridge the gap between the seasons. These plants which have flowering longevity-whether for their floriferous nature or for their long lasting flowers, have the ability to take the garden gently from one season to the next. They can for example form a bridge between the Spring garden and the Summer garden, ensuring that the transition is subtle and almost unexpected. Long lasting blooms can bring us from the Summer to Autumn in a soft and gradual transition, gently allowing the flowers to dominate the scheme, flower by flower.
The best flowers for the transitioning of seasons are ones which bloom for a long-time. One of my all time favourite plants is the Erysimum- the wall flower. A somewhat unassuming flower if looked at close up on its own, the multiple stemmed plant has an abundance of flowers which come together to form a striking whole. Riotous in colour and full of exciting tones, this flower is one of the most rewarding plants out there for the Spring, summer and even Autumn garden!
Erysimum plants are also one of the most attractive flowers for bees, butterflies, insects and moths and the flowers provide these pollinators with valuable nectar for many months.
The best thing about the plant when to comes to colour is that it keeps on giving all year. Sending up the first stems of flowers as early as February, this plant keeps opening new flowers until at least August. This year in my own garden I still have some going strong now in September and it’s one of the hardy, no-fail plants I love to scatter into the border here and there for creating a pleasing palette from Spring to early Autumn. While some of these plants tend to be fairly short lived, even the perennial varieties, they can be easily replaced with young plants which can be grown easily from cuttings. 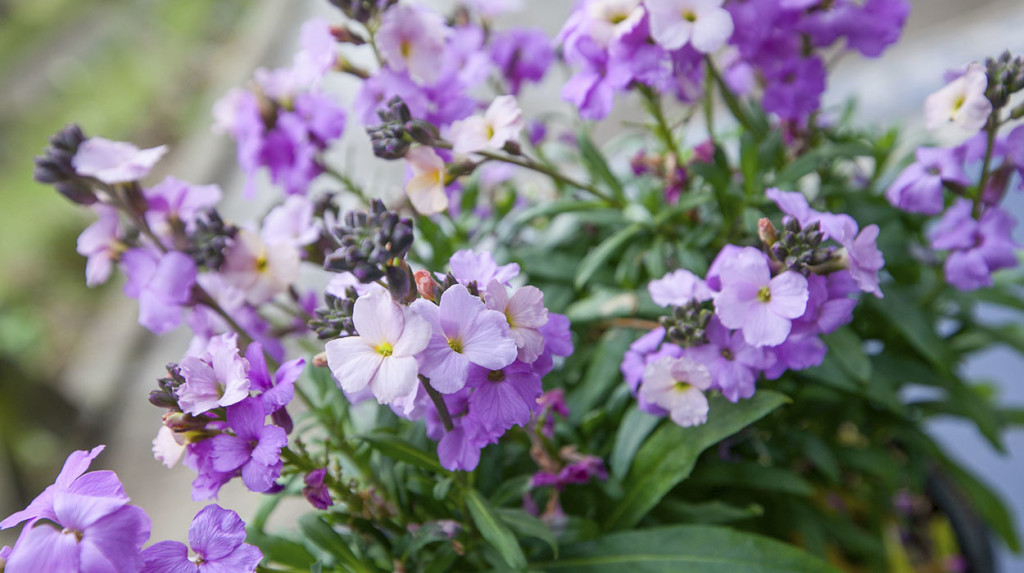 Varieties
The most popular and widely available of the wall flowers is ‘Bowles Mauve’ which is gorgeous with its plentiful mauve flowers. The ‘Bowles Mauve’ is a bushy and vigorous plant which will keep producing spires of purple colour from late Winter to late Summer, often even late into Autumn. It’s one of my favourite plants because it literally matches everything that pops up during the year. For early Geraniums such as ‘Dreamland’ or ‘Sabani Blue’ this flower plays a supportive role in shape and colour. When teamed with Salvia and Nepeta later on in the year, the plants again support in structure and also give a pleasing flower shape contrast to the more slender spires of salvia and nepeta. It also works wonderfully with tulips as they emerge, the peachy tones in the mauve of the flower perfectly contrasting varieties such as ‘Negrita’, ‘Purple doll’ or ‘Florosa’.
Asides from the ever popular ‘Bowles Mauve’ there are also plenty of other exciting Erysimum varieties with everything from bright yellows, burnt oranges, striking red, maroon, purple, brown and even white and cream varieties available. 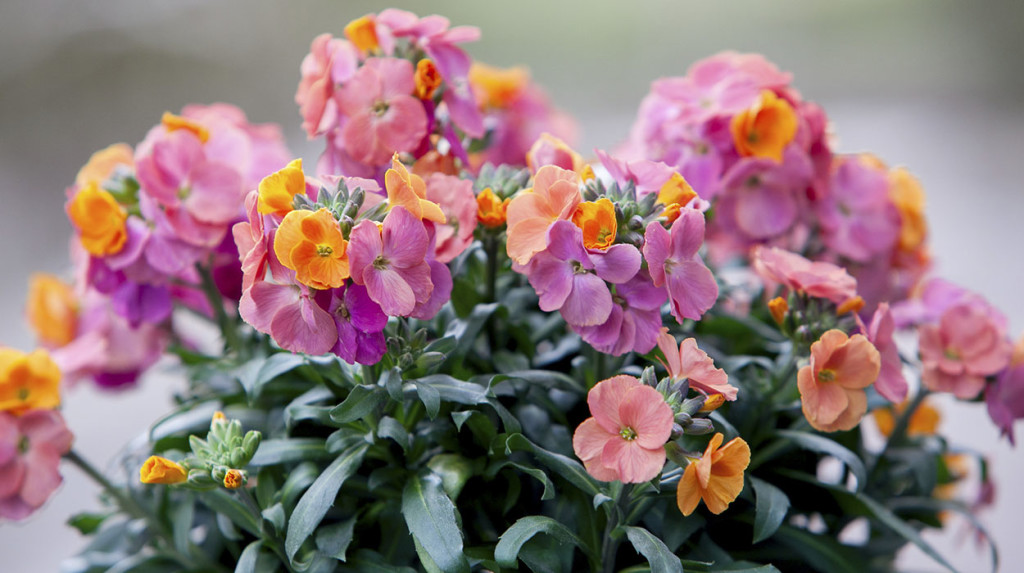 One of my favourites is the bicolour variety Erysimum ’Winter Party’ variety which has both the mauve as well as a gorgeous orange hue all in one plant. Where Bowles mauve’ can be somewhat leggy and tall and tend to flop over, this variety is a neat and compact evergreen plant which is the most widely available in the Winter series. It grows to about 30cm x 40cm and is a very rewarding one to grow- even doing well in containers.
Another striking shrub is the woody stemmed Erysimum ‘Apricot Delight’. This wallflower is a perennial plant and has gorgeous spires of apricot flowers for many months on end. It likes a moist but well drained soil and is gorgeous combined with some striking purple geraniums.
The Erysimum ‘Paint box’ variety is another lovely choice for the container or front of the border. It is fairly compact variety and while often short-lived, has a gorgeous colour combination of yellow, peachy yellow through salmon tones and all the way to purple-mauve. A bonus is that is also sweetly scented.
Did you know?

Interestingly the wall flower or Erysimum cheiri, actually comes from the brassica family Brassicaceae which is commonly known as mustards, crucifers and the cabbage family.  In fact, the wall flower, which is native to Europe has a striking resemblance to wild mustard. Especially when it develops its seeds, you’ll note the long slim seed pods look very similar to mustard seed pods.

The Erysimum files
Where to grow: In full sun
Soil: moderately fertile to poor soil -well drained and neutral to alkaline
Flowers: officially from February to August (but often far longer)
Hardy? Moderately -Erysimum may need frost protection in colder areas
Care: This plant is very low maintenance. Frost protection in the form of a cloche is really all they may need. Trim lightly after flowring- this prevents plants from becoming too leggy
Propagate: by taking semi hardwood cuttings in Spring or Summer.
Plant me: In front borders, banks and slopes, city, cottage and courtyard gardens, mild coastal locations. 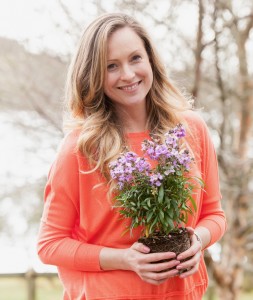 3 Ideas for planting wall flowers
Plants can really be brought into focus the they are given some striking companions. Here are some beautiful plant combos to make the most of your Erysimum plants:

Garden Heat
A great way to brighten up a garden is to create a border with some hot colours. Wallflowers, particularly the warmer toned ones, lend themselves to a hot scheme full of fiery colour. Achilleas such as the ‘Terracotta’ variety work wonderfully with orange or yellow wallflowers and if you love explosions of colour why not team these with some decadent day lilies? Hemerocallis ‘Anzac’, Stafford or ‘Red Ribs’ all work wonderfully. An added touch? A Dahlia ‘Nuit d’Eté’ will give stunning big starry flower accents in the scheme. 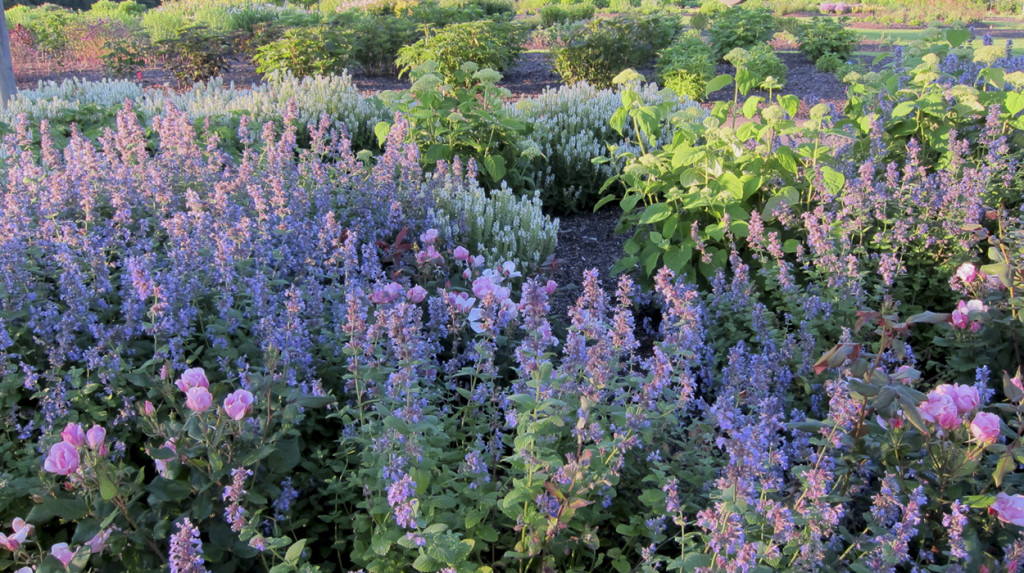 Romantic blues
The variety ‘Bowles Mauve’ is the perfect starting point to creating a romantic scheme of blues and purples. This is a border which looks good almost anywhere and uses easily available plants to create something gorgeous and dreamy.  Erysimum ‘Bowles Mauve’ becomes the main filler paint and then you can add allium bulbs- I love Allium shubertii which has a loose and fluffy appearance. Add some ground covering geraniums such as ‘Orion’ and finish off with spires of Salvia ‘Caradonna’. To extend the season you can add a few Sedums  such as the ‘Herbstfreude’. A stunning mix for bees and butterflies. 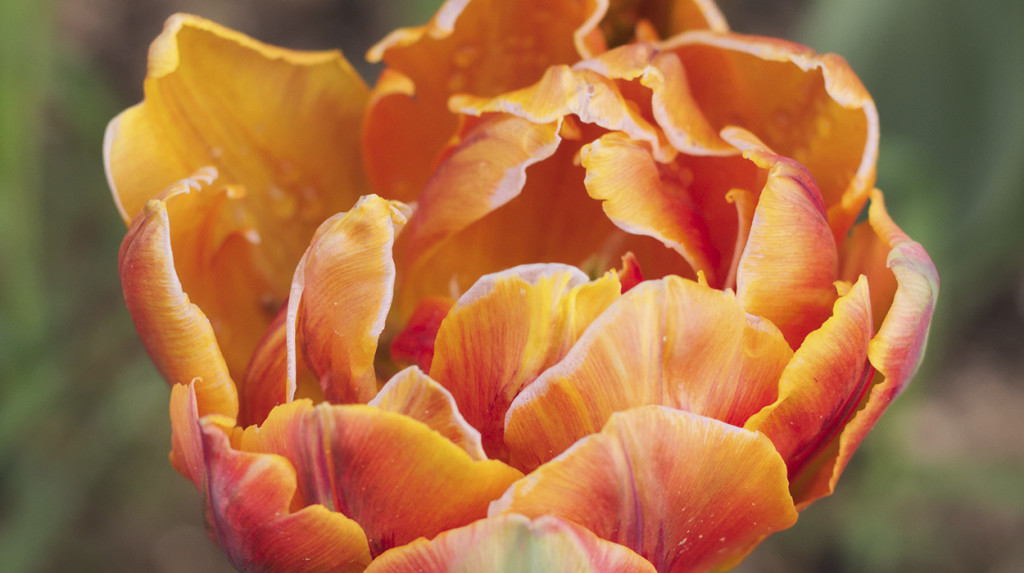 Spring riot
The combination of Tulips and Erysimum is a match made in heaven. Where Tulips are long and leggy and need some support, the Erysimum fills out the gaps and adds frothy texture. Plant masses of Tulips- perhaps choose two- I love the dark purple Tulipa ‘Negrita’ and double Tulipa ‘Orange Princess’ which has rich orange petals with a flamed garnet red centre and add some dazzling colour from the Erysimum ‘Paint box’. A gorgeous combination which lasts for ages. Extra tip here- plant your Tulip bulbs at slightly different heights underground- meaning they will grow slightly staggered- very pleasing to the eye.
▷Published in the IMOS 15.9.19 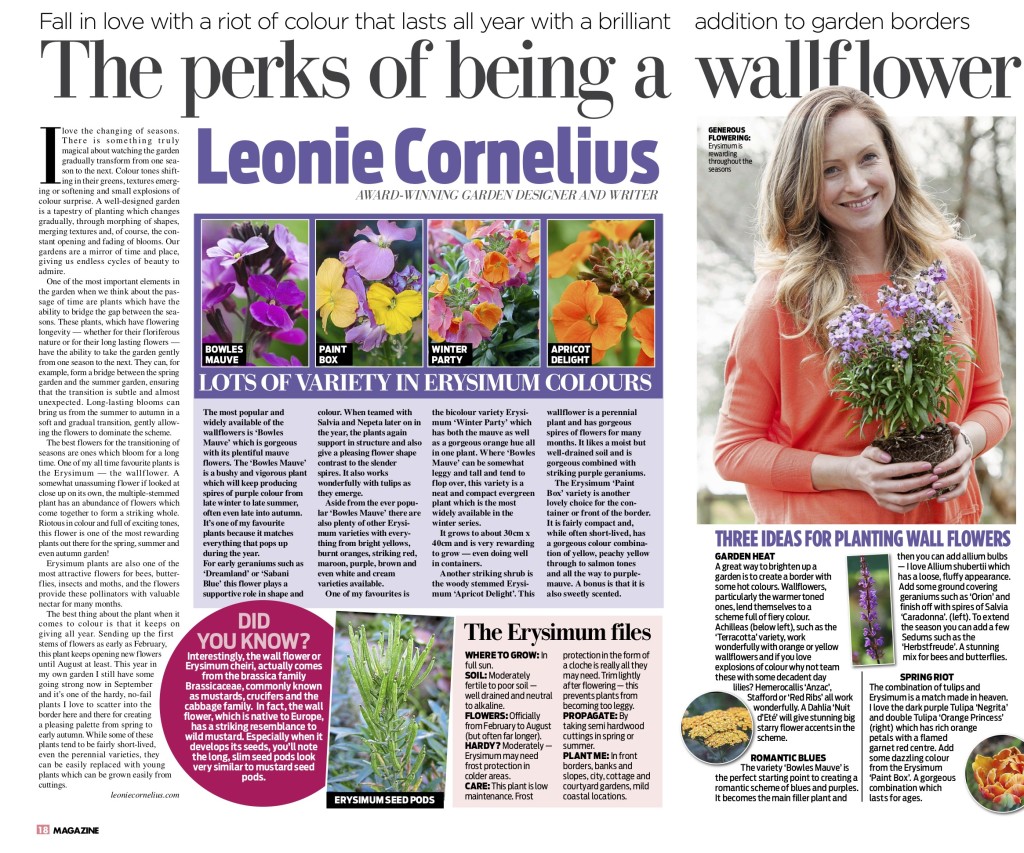 Grow your own Orchard