One of my earliest memories in the garden is picking fresh apples from a tree in my friend’s garden. Drawn in by the shiny red and perfectly imperfect spheres, we picked a couple and when I bit into the small fruit, the taste was a totally different one from shop bought apples. Tangy yet sweet and distinctly apple-like and yet it was fresher than any other apple I had every tasted. To this day, no store bought apple will ever compare the that home-grown apple, fresh off the tree.
Today I have a few trees growing in my own garden and love harvesting them when they are ripe. Growing apples is so easy to do and I find them one of the most rewarding trees to add to a garden. Even when designing gardens for clients I always recommend including at least one apple or fruit tree in the garden as they tend to be low maintenance and if given the right conditions, will reward you with an abundant harvest. 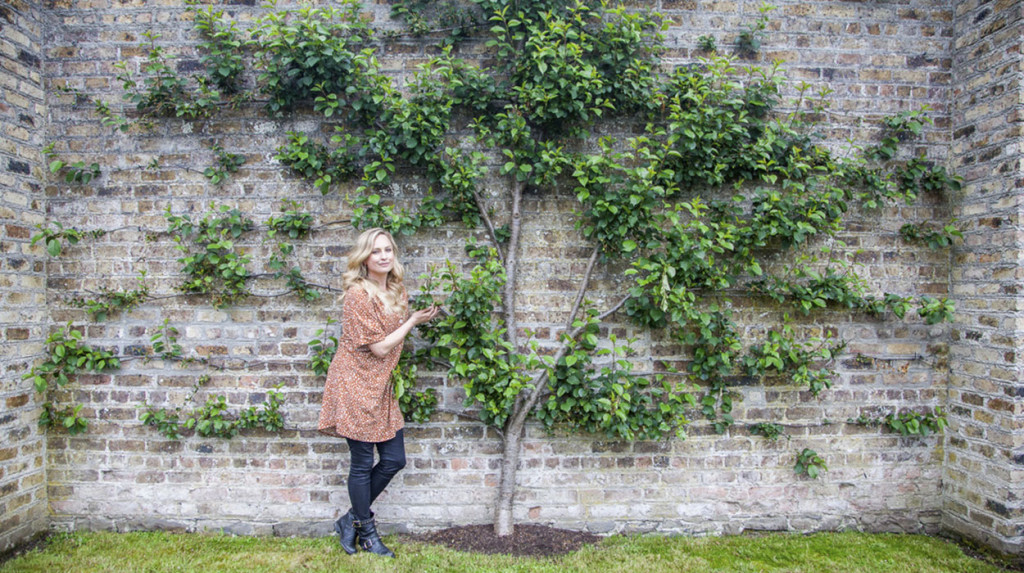 Location and soil
If you’re thinking of adding an apple tree to your own garden there are a number of factors to consider. First and foremost it is choosing the correct location. Apple trees like a certain level of protection and while they will tolerate a moderate amount of wind, they won’t do well in areas which are too wind exposed. If you do have a location which is somewhat windy the best thing to do is to plant some shelter bed planting or a wind screen hedge to shelter the tree. Also, added to this, the choice of apple variety will be vital- while some varieties might do well in say an East coast garden, it may not perform as well on the wild Atlantic way for example. Doing a little research and talking to people in your locale who have successfully grown trees is a great way of finding out which varieties will thrive in your location.
Soil is another impotent factor to consider when planning for your apple trees. Apple trees don’t like wet or overly acidic soil so making sure the soil is suitable and well drained is important. Also, keeping the area around the apple tree weed free is another important factor in ensuring your apple tree does well- generally a circle of a metre of weed free soil is recommended. 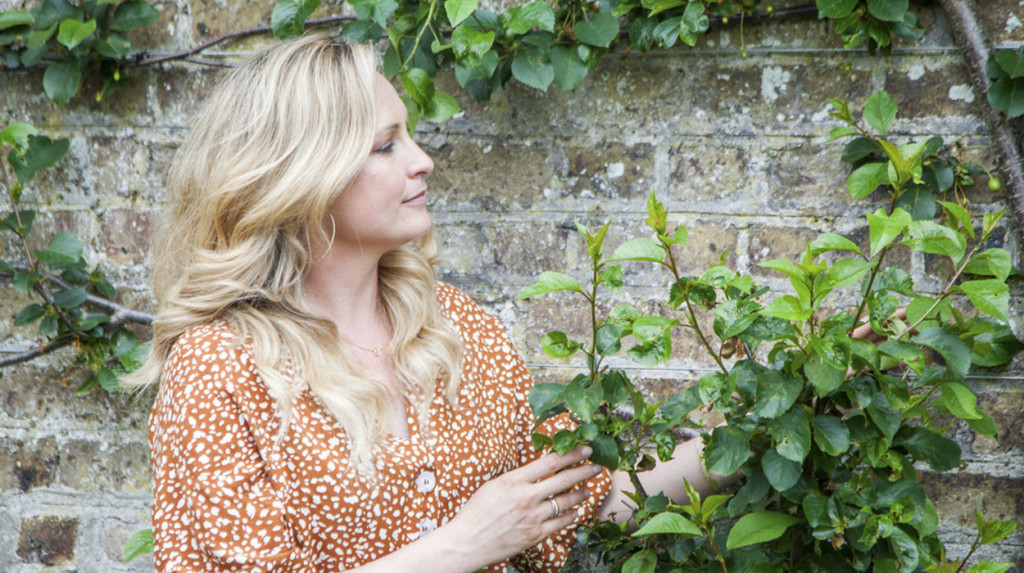 Varieties and taste
While there are thousands of varieties of apples, there are broadly two categories in apples; dessert apples which can be eaten raw, or cookers, which are generally more sour and need to be cooked. There are also some which are suitable for both and others which are suitable for cider and juice, but these generally fall under the culinary/cooking category.
Apple trees are pollinated by insects such as bees and also moths and one thing to remember is that to successfully produce fruit, most apples need a suitable partner to cross pollinate with. Considering this you have to think about what group your chosen apple belongs to. Most apple trees tend to fall into three flowering or pollination groups: early, mid and late season and when choosing a tree, it is impotent to consider what trees will be in flower simultaneously to cross pollinate. This means other apple varieties which flower at the same time are suitable companions and while crab apples cannot be eaten raw, they are also a valuable source of pollen for cross pollination of apples. 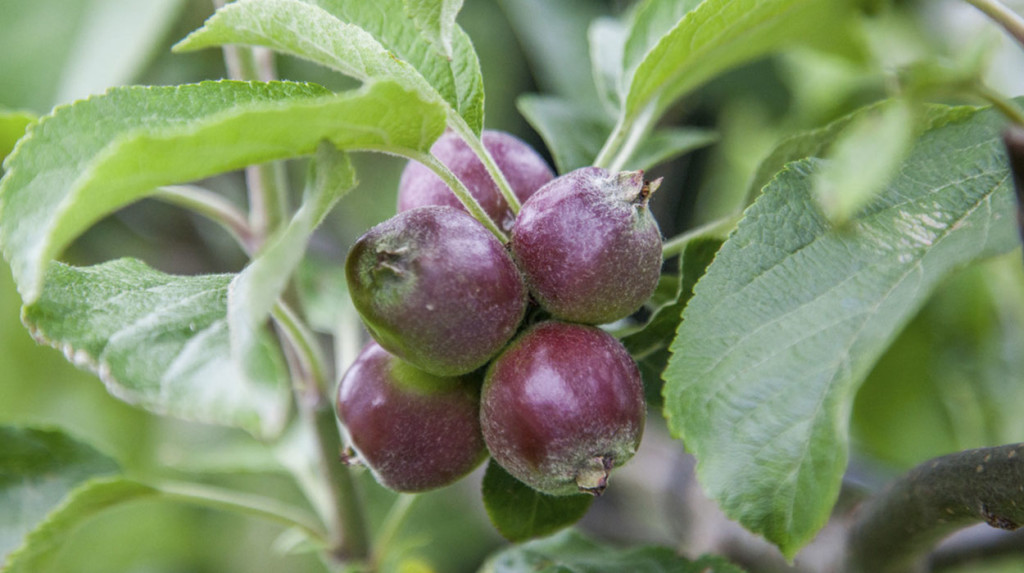 Choose your variety
While many garden centres have varieties available to suit most tastes, many people are discovering the beauty of growing our native Irish heritage varieties, one of which is shown here at the OPW  run Victorian garden at the Phoenix Park. The Irish Seed Savers Association (ISSA) a registered charity with the objective to conserve Ireland’s very special and threatened plant genetic resources and which is based in Capparoe in Co Clare. ISSA have a collection of 170 different varieties of apples with so many different sizes and characteristics and the perfect place to source your trees.
Choosing your variety is one fo the most fun aspects of growing your own orchard. First, consider what you want do do with the apples. Do you want to pick them and eat them fresh? Or perhaps you’re more interested in harvesting them for baking cakes and pies? Or maybe you would like to use the apples to juice or make cider? Thankfully there is a variety for every use and the Irish seed savers site has a wonderful choice for trees to suit most gardens and uses. Worth noting here is that the ISSA trees thrive under our Irish conditions due to the fact that they have been bred over centuries without the need for chemicals or pesticides, making them a wonderful choice for our Irish gardens.
Some varieties to try:
For Dessert:
The early ‘Beauty of Bath’ (aka Paddy of Toney) is early season apple is one of the first to ripen in August and has a sweet tangy flavour with soft flesh. It has a lovely dappled colour and is a popular one to grow in Ireland.
-Three more dessert apples: ‘Cavan Sugarcane’, ‘Golden Royal’ and ‘Irish Molly’
For cooking:
‘Aherne Beauty’ is a lovely mid season apple whose beautiful crimson fruit can be picked in September. According to ISSA it has been traditionally grown in the northern counties since the 1900’s and and has been known under its original name (Mere de Ménage) since the 1700’s.
-Three more cooking apples: ‘An Cailín Ban’, ‘Belvedere House’ and ‘Cavan Strawberry’.
For cider making:
Ballyvaughan seedling (aka White Moss) is a medium size apple which is a prolific producer. A late season flowering apple, it can be harvested in August and is useful for juicing, baking and cider making.
-Three more cider apples: ‘Bewley’, ‘Gibbon’s Russet’ & ‘McGrigor’s prolific cider’.
CLEVER TIP FROM ISSA
If you’re unsure of your site drainage you can do a small test. Irish seed savers recommends digging a hole about 50cm deep. After filling up the hole with water,  if after 90 minutes your hole has not drained of water, your site is not suitable for growing apples.
For more information on growing apples and in depth background on planting and varieties visit the ISSA website: www.irishseedsavers.ie
An ideas for the smaller garden
If you don’t have space but still want to get some apple trees then you can get dwarf varieties to suit balconies and patio containers. More creative again is to grow a heritage variety against a wall as an espalier- such as in the OPW’s walled kitchen garden in the Phoenix Park. In this way even small gardens can benefit from an abundant harvest.
Companion plants for apple trees
As mentioned apple trees are pollinated by bees and moths so planting flowers which draw them in are beneficial. Added to this there are some companion plants which are good with the trees. These include wild garlic, calendula, nasturtiums and chives. Also,  crab apples are a wonderful cross pollination plant so why not add a beauty to the garden such as Malus × zumi ‘Golden Hornet’ with its striking yellow fruit or Malus × moerlandsii ‘Profusion’. with the most divine pink flowers? Another variety is Malus Dr.Campbell which gives the most incredibly dark purple fruit which is great for jams, jellies and even juicing!