Every year, at the start of December the excitement of Christmas comes over me. December is that time of the year when I feel like I’m able to slow down a little, light the fire and start reflecting on the year gone by. I love the start of the festive season and almost like the build up to Christmas  more than the actual day. Decorating the house, baking cookies and making a handmade festive wreath, there is something so basic and calming about Christmas preparations.

Every year try and come up with something fresh and new for a wreath idea and the start of December will often see me roaming the fields around my house in search of berries, twigs and anything from the garden that will make a beautiful wreath. My love of the advent wreath goes back to my childhood in Germany where advent wreaths with four candles are to be found in most people’s homes at the start of December. Lighting that first candle on the first Sunday of the month was always so exciting and as more candles were lit every week we always knew that Christmas was close. When the fourth candle was lit, Christmas had arrived, with the build up being almost more exciting than the actual day.

The tradition of making wreaths has many fascinating stories attached to it in history.  Etruscan rulers wore wreaths as crowns in ancient Greece and Rome signifying their rank, achievement and status and laurel wreaths in particular were most commonly associated with achievement and victory. These laurel wreaths were worn by the winners of the original Olympic games and even today Italian students wear laurel wreaths the they graduate at university. During this time wreaths were also made using Oak leaves and were used to symbolise wisdom, leading back to Greek mythology and the story of Zeus resting in an oak grove. 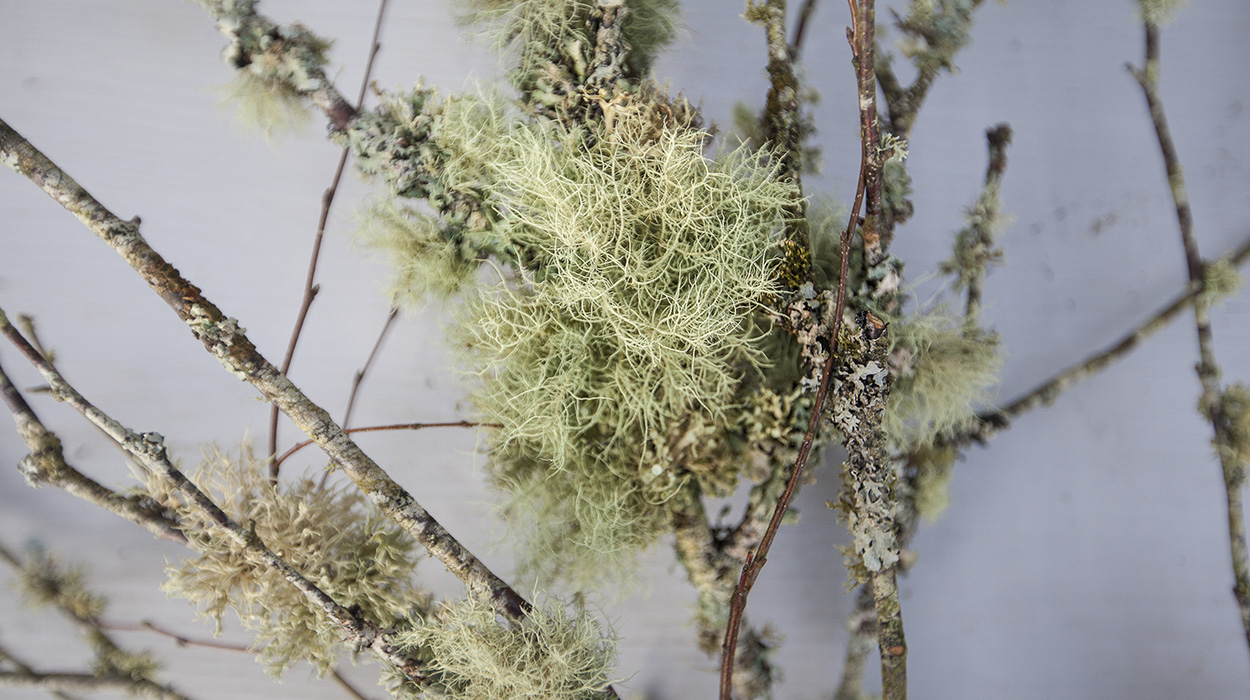 The modern wreath also has roots in the traditions of the harvest wreath, which has its origins in animistic spiritual beliefs of ancient Europe with harvest wreaths adorning many doors during harvest festivals and sometimes throughout the whole year as part of rituals to protect crop failure and plagues. Interestingly the tradition of the advent wreath was first used in the 16th century by German Lutherans and this was the start of the custom of lighting the advent candles in the four weeks leading up to Christmas. The plants used in these wreaths would have been mainly evergreen to signify the everlasting life brought by Christ.

For my own wreaths I like to get a bit creative and use whatever is looking beautiful in nature. Admittedly, at this time of the year it’s mostly twigs and berries or some more formal evergreens such as rosemary, bay and ivy. In the wreath I made last year I used the rich red berries of the Hawthorn to create a wreath but this year as I wandered along the lane, something else caught my eye over and over again. The bare branches on the birch trees that line the lane were covered in a downy looking, moss like material that I knew to be called Lichen. With the branches of the trees now all bare, this strange material really stood out to me and made me think about learning more about this delicate substance which you see on trees all over Ireland.

So what are lichens? Well, lichens are absolutely fascinating creatures. Many lichens have common names which hint at them being mosses such as ‘Reindeer moss’ or ‘Iceland moss’ but the lichen is not related to any plant or moss. In fact a lichen is not a single organism but rather a combination of two organisms living symbiotically together. In essence it is a composite of algae and cyanobacteria living among filaments of multiple fungi. So, to simplify the idea, it is sort of like an algae living inside a type of mushroom. Fascinatingly the combined lichen has different properties to those of the algae and fungi themselves. These two organisms come together because they give each other benefits that each single one does not have on its own. The fungi component of lichen for example is not capable of performing photosynthesis like plants do, by harvesting light energy from the sun to generate carbohydrates. By teaming up with algae, the fungi, which is the dominant partner in this relationship, is ensuring itself a constant supply of nourishment. In return the algae and cyanobacteria, which are very sensitive to ultraviolet rays,  are given a secure and protected environment, often in the form of a protective pigment absorbing shell of the fungi.
Visually lichens are absolutely fascinating to study up close and have so many different varieties and colours. There are an estimated 20,000 known species of lichen in the world and it is estimated that 6% of the earths surface is covered in lichen. Lichens are considered to be among the oldest living organisms and they are one of the first things to grow on exposed rock after events such as landslides.  Interestingly in periods of extreme dryness, lichens are different from plants and animals. Rather than simple dehydration, lichens experience a complete loss of body water and are capable of surviving extremely low levels of water. With the introduction of water, they can reconfigure their membranes to absorb water within minutes, once again becoming fleshy and soft.

Considering the adaptability and longevity of these organisms it is no wonder that lichens have adapted to the most extreme environments on earth with varieties growing everywhere from hot, dry deserts to rugged coastlines to the arctic tundra. These wonder creatures can even live inside solid rocks and even more extreme-they can survive in space!  With all these fascinating properties I think the lichen more than deserves to be celebrated in my Christmas wreath this year.

Lichen grow in many different variations and have countless different growth forms. Here are some examples of different groupings of lichen:

Fruticose- This form appears almost like a leafless mini shrub in form and can grow upright or hang in a pendulous fashion.

Foliose-A flat, leaf like lichen which grows low on the branch.

Crustose-These are very flat and grow almost like a thin coat of paint. The yellow lichens on costal rocks are a good example.

Squamulose-These have small, overlapping leaf like scales which are tightly clustered.

Leprose-these have a powdery or granular surface

Gelatinous-as the name suggests these have a jelly like texture

Filamentous- these lichens have stringy or matted hair like filaments.

Byssoid-these have the appearance of soft, teased cotton wool

Lichens are very sensitive to pollutants in the air and are therefore good indicators of air quality.

Dark Habits | Black in the Garden